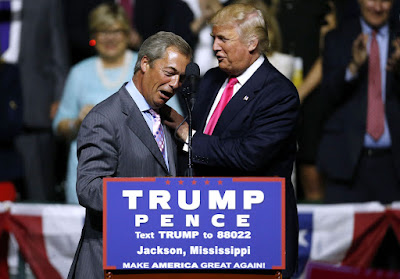 A nation divided or how we have to reap what Justin sowed.

For many of us staring into the abyss of deeply fractured America is chilling. Well get used to it, buttercup, we're going down that very same road. From The Tyee:

The American political sickness has infected us. And it’s hard to see how our democracy can cope.

Start with an Angus Reid poll released last month. It asked people to set out the three most important issues facing the country.

Climate change and environment, said Canadians. For 40 per cent of us, the issue was among the three most important.

But only eight per cent of Conservative supporters cited climate change and the environment as an important issue.

Traditionally, political parties have competed for votes based on their proposed solutions to what most of us see as problems. Waits for surgery might be too long, for example. One party might argue the answer is higher taxes and more funding for health care; another might campaign on a promise to allow people to pay for private surgeries and skip the queue. Voters can decide.

But when we no longer even agree on problems, our version of democracy doesn’t work. We’re divided into camps, staring at each other with incomprehension, scorn or, occasionally, hatred.

And when the breakdown is centred on an issue that’s widely accepted as a grave threat to humanity, we’re moving away from useful political debate to destructive factionalism.


Racism is embedded in our society. Many Canadians alive today grew up in a time when overt or institutional racism was accepted. It is still part of our culture, a daily reality. The challenge is to acknowledge that reality, and do better.

But the poll results signal that many Conservative supporters don’t share that belief. More than two-thirds are prepared to proclaim that people with different coloured skin or different religions shouldn’t be allowed into the country.

While our actions have often betrayed our principles, Canadians have broadly accepted the notion that racism is wrong. It is part of the context for our society and politics.

But current Conservative supporters are rejecting that principle.

Racism is OK again, at least when it comes to immigration.
EKOS concludes something much bigger is going on. The poll results reveal a surge in support for “ordered or authoritarian populism,” it says.

It’s a global phenomenon, but U.S. President Donald Trump offers a good case study. His supporters — not all — oppose immigration, especially non-white immigration. They don’t trust political parties or other institutions, science, people with expertise or anyone who holds a differing view. They want a strong leader and more police and, as EKOS summarizes, share “a general desire to pull up the drawbridge and return to a ‘greater’ more secure past.”


[Angus Reid] asked supporters of the three national opposition parties about their second choice. About 85 per cent of NDP voters had one in mind —Liberal was the leading option. Most Green supporters also had a second choice, with the NDP leading the way.

But more than half the Conservative supporters — 53 per cent — said they had no second choice. (The People’s Party was the leader among those who did have a choice.)

It’s hardly new that many people are committed to a political party, for a variety of reasons.

But the value of political campaigns and debates is eroded when more than half the supporters of one party declare their minds cannot be changed by anything they hear or read, or the qualities of the local candidates.

And the party leader is freed from a sense of responsibility to supporters. No matter how badly he or she behaves, the flock will follow.

...We’re entering into a post-Trumpian political era in Canada, one where we are divided in ways that don’t allow rational discussion. One where we no longer listen to one another, and where we see enemies, not people with different solutions to shared problems. One where fear — of immigrants, experts, others — replaces hope.

Trudeau's fanboys won't like to hear this but the Dauphin's refusal to implement electoral reform played a contributing, albeit perhaps not dominant, role in our political malaise. If there was one thing, above all others, that became clear during Harper's reign it was how badly Canada needed democratic restoration.

We can no longer survive as a society when fewer than two out of five can deliver a false majority mandate to a guy like Harper or even a guy like Trudeau. They become unresponsive to the democratic health of the nation and that permeates down to the electorate.

Justin knew this when he appealed to voters in 2015. He probably still knows it. The difference is first-past-the-post delivered him an undeserved majority in 2015 and will favour the continuance of powerful Liberal/Conservative governments in the foreseeable future.

After all, why put up with the messy business of governance when you can rule instead?
Posted by The Mound of Sound at 9:27 AM

tide is running in
not a lighthouse in sight
no life jackets aboard
its dark.. very dark

welcome to Canada eh ..
can you swim ?

"Justin knew this when he appealed to voters in 2015."

another narrative that has become more compelling to me:

As leader of the third party Jr felt he could promise the moon w/o needing to worry about winning enough power to be held to his promises.

Why appoint the greenest rookie to the portfolio otherwise.


NPoV you sent me scrambling for the worlds of Theodore Roosevelt who, in 1910, standing on a farmhouse kitchen table, spoke for 90-minutes to a gathering of civil war veterans in Osawatomie, Kansas. Early in his speech Roosevelt said:

"A broken promise is bad enough in private life. It is worse in the field of politics. No man is worth his salt in public life who makes on the stump a pledge which he does not keep after election; and, if he makes such a pledge and does not keep it, hunt him out of public life."

We only get consulted every four years when an election rolls around. If the bastards can't tell us the truth on the hustings, we should hunt them out of public life. That goes doubly for people who are pretty and trade on a legendary name.