Don't They Come in Gold? 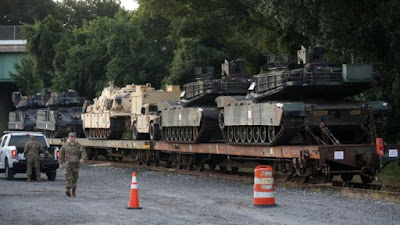 Maybe it's for the Fourth of July festivities. Maybe it's a dress rehearsal in case he loses the presidency next year. Either way, Donald Trump has brought the big guns to Washington.

At his "Salute to America" on Thursday, Mr Trump will address the nation from the Lincoln Memorial in Washington DC amid a parade of military tanks.

But city officials have expressed dismay at the possible damage to roads at the 4 July event.

"We're going to have planes going overhead - the best fighter jets in the world and other planes too," the Republican president told reporters at the White House on Monday.

"And we're going to have some tanks stationed outside."

He said the event will "be like no other, it'll be special".


God Save Amerika
Posted by The Mound of Sound at 10:38 AM

The man is mad. Can Americans not see that?

"be like no other, it'll be special" it should be up his axx.


Some do, Owen, but not his base. I expect a good many of the Congressional Repugs realize it but they won't even stand up for America against him.

Where will he find enough chicken hawks to fill all the VIP seats? Is Stephen Harper available?

I hope he doesn't run out of things to brag about when he gives his speech. If he does, I guess he'll just have to make up some.

Don't you just wish that one of the tanks breaks down during the parade and stops it?


I believe those vehicles should be repainted a really artificial orange colour. You know, coordinate with the Great Bloat at the podium.