This Year the Arctic is On Fire 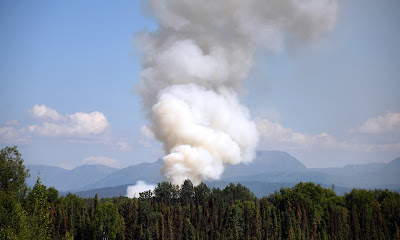 It's been damp and chilly down here on the island. It's not great but at least the rains have been limiting the fire risk and we've yet to have one of those choking smoke days.

Those wanting warmth can head due north. It's much warmer in Alaska than in coastal British Columbia.  Anchorage had a record 90F day last week, its hottest day ever. But, true to form, warmth brings fire and fire brings smoke laden with fine particulate matter, carbon monoxide, even cyanide. 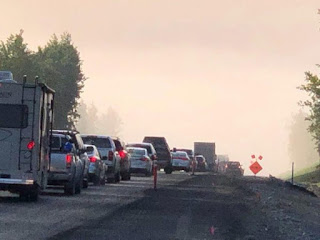 It's not just the trees that are burning. Tundra is essentially peat, an ancient fuel, and as the tundra thaws it dries and can easily catch fire.


Arctic wildfires, some the size of 100,000 football pitches, emitted as much carbon dioxide (CO2) last month as the country of Sweden does in a whole year, the World Meteorological Organization (WMO) said on Friday.

“Since the start of June we’ve seen unprecedented wildfires in the Arcticregion,” a WMO spokeswoman, Clare Nullis, told a regular UN briefing in Geneva.

“In June alone these wildfires emitted 50 megatonnes of CO2 into the atmosphere, this is the equivalent of Sweden’s annual total CO2 emissions. This is more than was released by Arctic fires in the same month between 2010 and 2018 combined.”

My inclination to vote Green is already wavering.

"Experienced Chretien political strategist @kinsellawarren will be helping out @ElizabethMay & @CanadianGreens in its war room in federal election. "

But Kinsella is a professional loser. What is he? 0 for 4? 0 for 5? Why go to him for advice when there's analytic firms throughout Canada chomping the bit to prove their formulas?

Hey mound, just wanted to thank you for your blog. I've been reading it for .. years. I share a lot of sentiment with yourself.

Sort of off topic, but I wondered if you'd ever read Bob Altemeyer's work on Authoritarians @ https://www.theauthoritarians.org/ ?
It helped me understand the rise of 'right populist ' parties. Very sobering and kind of depressing stuff. But bad news is like Jello, there's always room for a little more.

Also, I find it quite hard to actually talk to people about the gravity of the situation we're in. There is just a (totally understandable) denial. That's being alarmist. It's too bad a scenario, therefore it can't happen. But most people are too busy trying to not get evicted or laid of or starve to death, etc. to have time for anything else.

Also, the "737-MAX Thing" got me thinking, why do we have aviation, or cruise ships, (or any number of destructive and unnecessary luxuries)? Given that our survival is at stake, why weren't these shutdown.. in 1993ish.. for that matter, I mean we could ground all aircraft today. Right now. But.. reasons.