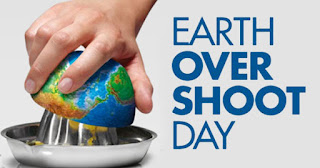 It's Earth Overshoot Day, the earliest ever. That's not a good thing.

July 29 marks the day on which humanity, the lot of us, have consumed the total volume of biomass, freshwater and clean air that Earth can provide in an entire year.

For the remaining five months of the year we'll be dependent on consuming the planet's dwindling resource reserves and/or contaminating the biosphere with pollution of all descriptions that are beyond the Earth's cleansing capacity.

In the late 70s, overshoot occurred in December. Since then we've moved the goal posts back through November, October, September, August and now into July.

I read a piece in Forbes today that contends the whole "overshoot" business is fake science.  The only real problem, writes cultural anthropologist Michael Schellenberger, is carbon emissions and the way to solve that is to decarbonize.  Easy peasy.

Sorry, Mike, but that's pure bullshit. Climate change is one existential challenge. So too is our ravenous over-consumption/exhaustion of the planet's resources. Add to that our inability to cap our population levels to stay within the planet's carrying capacity.

Solar power, dandy as that is, won't solve our worsening degradation of the planet's finite soil reserves. Decarbonization won't stop us from over-fishing, collapsing one fishery after another as we "fish down the food chain." It won't reverse the staggering decline in populations of both terrestrial and aquatic species since 1970. It won't solve our spreading oceanic dead zones or the algae blooms that poison our lakes and rivers. It won't fix our worsening freshwater crisis, especially the depletion of our groundwater reserves.

Whether it's climate change or overshoot/resource exhaustion or overpopulation, there's only one answer. Mankind has to learn to live within the finite limits of a decidedly finite planet, our one and only biosphere, Spaceship Earth. That's all we've got. Whether Mike wants to believe it or not, a shift to clean energy - even if that was realistic - is not going to cure what ails us.
Posted by The Mound of Sound at 11:40 AM