Science versus Politics, Your Future Hangs In the Balance 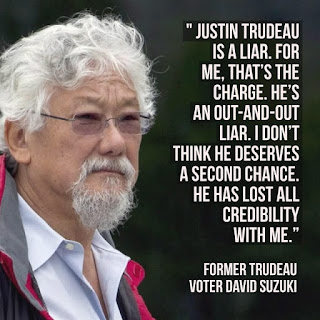 David Suzuki versus Justin Trudeau. Science versus Parliament. The stakes couldn't be higher. Who do you think is on your side?

We have two choices. We can either have a viable future or we can have a nightmarish future.

Here are excerpts from an interview with Suzuki that appeared at therealnews.com yesterday. In it Suzuki addresses the hypocrisy of declaring a climate emergency and, in the next breath, green-lighting a climate wrecking bitumen pipeline; and the pursuit of perpetual exponential growth, an economy that is the engine of our destruction.

On declaring a climate emergency one day and less than 24-hours later approving a bitumen pipeline:

...it just shows what a joke the whole declaration of a climate emergency is. I mean, if it’s a climate emergency, first of all, when Japan attacked Pearl Harbor, I don’t think the Republicans said, “Oh, that damn Democratic president wants to take us to war and is going to destroy the economy.” Everybody joins together in that emergency. It’s got one purpose, which is to win the battle. The battle here is in terms of the amount of carbon that’s accumulating in the atmosphere. We’re way beyond and heading to a total by the end of this century that really puts into question whether human beings, as a species, will be able to survive.

...And when Mr. Trudeau was elected, he said “Canada’s back,” went to Paris, and not only signed the Paris agreement, but said we should aspire to keeping temperature rising above 1.5 degrees by the end of the century. That’s a tough ask. I emailed Mr. Trudeau after that and said, “That’s a hard target, are you serious?” And he emailed back and said, “Yes, I’m serious.”


... He told us right from the beginning that he was going to build the pipeline. So you can’t do that and then say, “Oh, we’ve got a climate emergency, we’ve got to deal with this” The Intergovernmental Panel on Climate Change in October of last year said that we–if we’re going to meet this crisis and try to keep temperature rising above 1.5 degrees since pre-industrial times by the by the year 2100–in order to do that, we have to reduce our emissions, that is our use of fossil fuels, by 45 percent 2030 and 100 percent by 2050.

In order to meet that target, Bill Reese, who is the scientist that coined the expression “the ecological footprint,” Bill Reese says we have to reduce energy use by 6 percent a year starting last year. Well, I don’t see any sign of reducing our emissions. And the idea that we’re going to allow expansion of the Alberta tar sands but then use the profit that we’re going to make on that venture to invest in clean technology strikes me as absolutely stupid.

... Mr. Trudeau said this before or after he approved the pipeline–I can’t remember when–but he said, “No country would leave that amount of oil in the ground.” And yet, if we take the science seriously and we say that we have to reduce energy use by 6 percent a year, we have to be off fossil fuels by 2050, it doesn’t make sense then that we’re still looking for more, that we’re still saying, “Oh, the Arctic ice is going away, we can look for oil up there.” We’ve got to shut it down. 80 to 85 percent of our known reserves have to be left in the ground. And I would think the first thing you do is leave the most carbon intensive source of oil in the ground first. That’s where we’ve got to start.

We're chasing economic growth, an economy that we cannot survive


...The economy is already the driving force of our destructiveness. It is way too big. We’re going to have to live much more lightly on the planet. And that means every year we’re not going to be able to find new editions of our iPhones or our iPads or our laptop computers. It means that we’re not going to be able to buy clothing that’s in fashion every month. The clothing industry and fashion is one of the most destructive activities. We’re simply–we’ve got too heavy a footprint on the planet, and that’s got to be met. When I say we can’t go on living the way we’re living now, people immediately say, “Oh, are we going to have to go back to living in caves? Are we going to have to grow all our own food and make our own clothes? And I say, “No, but how about 1945? When the war was over and we were going into a period of prosperity, I was a child in 1945 or 1950, how about that? We had telephones, we had cars, television was coming in.”

...You know, I like to tell people, my family was impoverished after the Second World War. We lost everything because we were Canadians of Japanese origin. We lost all our stuff, shipped to a camp, and kicked out of British Columbia at the end of the war. And all my life, I’ve worn blue jeans. Why? Because denim wears like iron. And now I look at kids buying blue jeans costing hundreds of dollars that are already ripped. I don’t think it looks good, but I guess they think it’s fashionable and looks good. But what is the message in that purchase? It’s saying, “I don’t really care about the planet. I just want to look a certain way. I’m buying this stuff, but it doesn’t matter to me that it wears like iron, that it’s durable, because I’m going to toss it out when I’m done with it or when the fashions change.” That’s the kind of species we have become.

"...The economy is already the driving force of our destructiveness. It is way too big. We’re going to have to live much more lightly on the planet." It is sad that this is not the word on the lips of all Canadians.....
"sustainability" Anyong

The worst part, Anyong, is that so many have been conditioned to believe in "sustainable growth" in production, consumption, GDP.

The essence of 'steady state' or 'full Earth' economics is that growth would switch to knowledge aimed at improving quality of life instead of quantity of life.

You would buy items such as appliances that now often have a service life between five to seven years that would last for twenty or twenty-five years. These items would be designed to be easily reparable and just as easily upgradeable.

.. I believe Canada and Canadians MUST RECEIVE the truth.. the basic clear facts of WHERE THE PROFITS ALREADY WENT ! Yes.. don't promise us the same squirming pig in a poke.. That's the current Trump horseshit grift.. All That Greatness.. yum yum..

There's a sliding scale.. and yes it gets complicated.. when extracting and selling resources to those who control the means of refining, reselling, distributing etc. Costs may go up, value may fall.. and there are consequences to pollution or poison.. so that needs clarity. But 'Sunny Days' is a slogan.. nothing more. Show Us The Money is a better one.. and tell us who is actually getting the money.

Boat Harbour keeps flashing a light for me.. like a lighthouse or navigation buoys. Yes, the timber became pulp and paper. Local employment.. a small town sprung up, people bought groceries, drove cars etc, schools.. So where has Boat Harbour played out to now? The level of toxification is out of control.. the toxic effluent has to be dumped somewhere after storing it for a laughable 'settling' plan. What else do we know? The entire estuary was poisoned.. the water and environment died a hasty death. No swimming, keep out. The volume of daily toxic water generation is astonishing.. thus they now want to pump directly into Northumberland Strait.. where the lobster and shellfish are essentially the only sustainably fisheries

Does any of this relate or resonate in regard to Tar Sands Remediation ? Fracking Remediation ? Environment ? Who has the money ? Who has 'the vast wealth? How did Grassy Narrows play out ? Mercury poisoning.. the money you ask ? Hell, the politicians and bureaucrats just keep on lying.. ITS THEIR NATURE !

The factual story of diluted bitumen is known science.. and known.. though floating economics. It is not 'oil' - rather it is a petroleum energy source.. and bitumen deposits are approx 96 % of Canada's known petroleum reserves. That fact alone should set off alarm bells.. Our 'reserves' are bitumin - other countries 'reserves' are oil.. though Venezuela also has bitumin deposits - of higher grade (lower sulphur) than Canada's

Unless we cease and desist expanding fossil fuel extraction and consumption in Canada.. we are headed down a fatal passage.. killing our atmosphere, environment, our waters.. our species - including ourselves.. Bottom Line Time folks.. Trudeau and Scheer are lying to all of us.. churn baby churn.. Alberta Uber Alles under Jason Kenney.. Pipeline To Heaven Under Scheer.. we are spoon fed daily morsels of moralism.. All The Profits ALL THAT WEALTH.. is a grift.. a squirming pig in a poke with lipstick.. its delusion tricked up via illusion.. and we keep buying the squirming pet pig.. but it seems that somebody we never get to meet is keeping it safe somewhere.. for dinner later.. eh (it will taste GREAT & feed us all)

BTW .. where the F is responsible media.. or is that what's squirming.. in the bag ? Is main media now just a trained pig ? Part of the grift ?