"Two Solitudes" - We're At It Again 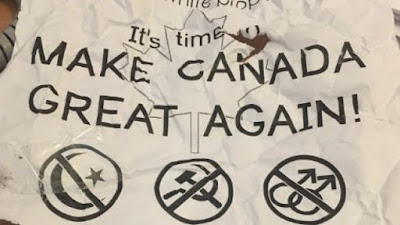 Donald Trump didn't hesitate to boast "I love the poorly-educated." They are, after all, disproportionately represented among his base.

In today's Globe Konrad Yakobuski asks if this is Canada's "Deplorables" moment?

The most consequential development in U.S. politics in recent years has been what’s called the “diploma divide.” White Americans without a college degree, who once solidly backed Democrats, now vote overwhelmingly Republican. The Democratic base has shifted from the white working-class to visible minorities and white urban elites with college degrees.

This cultural segregation along political lines means that Democrats and Republicans no longer speak the same language or espouse common values. They are not only uninterested in hearing the other side; they are contemptuous of it.

...University of Ottawa professor Amir Attaran set off a Twitter storm this week by calling the Conservatives “the party of the uneducated,” based on Abacus Data poll showing the Tories with a 12-percentage point lead over the Liberals among Canadians with a high-school education or less. This, in Prof. Attaran’s view, is why “Conservative governments offer numbskull policy, like Buck-a-Beer,” one of Ontario Progressive Conservative Premier Doug Ford’s signature initiatives, which may or may not be as dumb as it sounds.

...you only have to look up the word “numbskull” in the dictionary to understand that Prof. Attaran did not mean his remarks to be taken as a compliment. They were a clear dig at the supposedly less-enlightened ideas of the Canadian right, which, under its current cohort of leaders, tends to celebrate know-nothingness over investigation and evidence-based policy.

Needless to say, Prof. Attaran’s tweets had the desired effect of provoking outrage and hysteria among some excitable Conservatives. A few of them responded in vulgar terms, which only served to reinforce the depiction of Conservative supporters as inarticulate yahoos.

...With an election looming, Liberals should ...be asking themselves how their party came to lose voters with a high-school education to the Conservatives. In the 2015 election, high-school educated Canadians split their support almost evenly between the two main parties, as EKOS pollster Frank Graves pointed out on Twitter. A May EKOS poll, however, showed the Conservatives with a 2-to-1 lead over the Liberals among this group of voters.

Our once big-tent parties are no more. Most Canadians with a postgraduate degree would no longer dream of voting Conservative; working-class voters with a high-school education have come to see Justin Trudeau’s Liberals as elitist and out of touch with their everyday concerns.

How did that happen?

Maybe it’s because common folks can see through all the virtue-signalling and high-minded tweeting the Liberals engage in. Mr. Trudeau does a very good job of showing he cares for the oppressed in society but seems less preoccupied with the concerns of blue-collar Canadians. This makes him popular among campus elites. But he comes off as a poseur down at the pub.

I think Yakabuski is missing an important point. Today's Tory base isn't a response to Liberal elitism. Its roots go back further than that. They trace back to the masterful campaign of fearmongering perfected by the Republican Party. They weaponize fear and insecurity to harness and mobilize their own base, their supporters. Whether in the US, Britain, Hungary, Poland, Italy or Turkey, they use that weapon against their own voters, boosting it as necessary with xenophobia, racism and every other base instinct they can whip up. 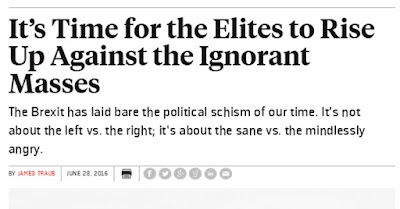 This is in stark contrast to real leaders such as FDR who, in the aftermath of Pearl Harbor, took to the airwaves to comfort and assure the American people that they had nothing to fear but fear itself.

The far right in Canada, the radical right of today's Conservatives and PCs, have no use for Roosevelt's call to courage. They don't need it. They know their target, their base, and that their base is not prone to critical thinking but very susceptible to fear-messaging.

Even though Canada has a highly-educated population, the Tories don't need it to win. Thanks to the first-past-the-post regime - that Trudeau chose to leave in place - the easily frightened and outraged can be enough to put the rightwing in position to achieve a false majority, hopelessly undemocratic government. Trudeau promised we would never have to endure this form of political perversion again.

"This time we're pitting the educated and informed against the poorly-educated and ill-informed. One side favours Tories, the other side supports the Liberals, NDP, Greens, etc."

Hmmm... There seems to be a problem with parallel structures in those two sentences. I'm assuming you didn't mean to imply that the educated and informed favour the Tories.


I see your point. You assume correctly.

Sorry to go all grammar Nazi. I spent the afternoon editing the hell out of a written submission and it's hard to snap out of that mode.

To your larger point, I think we've all been dumbed down, not just the benighted Con voters. Politics has become pro wrestling - a great spectacle that mimics real politics but accomplishes little. So we have "faces" like Trudeau and Horgan pretending to fight it out with "heels" like Scheer, Kenney and Ford, with a modern-day Tiger Jeet Singh to keep attention on the NDP. The public cheers and boos while the owners make millions at their expense through deals everyone knows are crooked.

It's all distraction to ensure that real problems like climate change, wealth inequality and appalling conditions in native communities never get addressed. Because the owners don't want any of those issues fixed. You talk about Roosevelt's call to courage, but there's none of that in sight. We're all so used to being entertained we can't imagine getting off the couch.

Cap, relax. That needed to be pointed out. It's sheer laziness on my part. Very little of what I write is ever proof read and I know it shows. There was a time when, for example, it was necessary to present written submissions on case arguments that I was incredibly diligent. When you've worked through the night to bang out a 40-page affidavit and have to ensure all the paragraphs are congruent it's as much work as it took to write the damned thing in the first place.

Tell me, what do you think would be fair. Should we require that they all don Mexican wrestler masks? Your point is inarguable.

Cap, where are we to find their kind now in this moment when that is so needed?

Can't we devise a better slogan than "Make Canada Great Again"? Why do we have to follow those Americans. Oh yes I understand, we aren't informed and so in love with Americans. At least in Alberta they are. Anyong

It's much easier to appeal to our Darker Angels than to our consciences. And the Right knows how to peddle fear. They are a formidable force -- not to be easily dismissed.