Maybe the Greeks Were Right


The ancient Greeks believed in hubris and nemesis.

Hubris is associated with arrogance, pride, and a dangerous overconfidence that often leads to punishing a victim.

Boeing was hubristic when it set about undermining Bombardier's C-Series jetliner. Although the Canadian C-Series jet didn't directly compete with any plane in Boeing's stable, the American giant nonetheless snagged the upstart Canadian with trade complaints, a behaviour we've seen all too often from American industries. Eventually Bombardier was compelled to accept a rescue bid from Airbus that now sort of owns the C-Series aircraft.

Boeing really gained nothing from it except to punish the upstart Canadian manufacturer.

Back to those ancient Greeks. They believed that the arrogant would pay for their hubris. The winged goddess, Nemesis, whose name means "to give what is due" would exact retribution from those who succumbed to hubris.

Hmm, anything cataclysmic happened to Boeing lately? Has Nemesis paid them a visit? Oh yes, the 737 Max 8 fiasco.

After two Max 8s suddenly nose dived into the ground in March, Boeing began by blaming the pilots. When that didn't work and country by country began grounding the Max 8, Boeing said it was a software glitch and they'd set it right in no time. But, at no time since then have they set it right. Rather than coming out with an easy peasy fix the investigation has uncovered one or more additional dangerous problems.

Boeing's reputation has taken a body blow. The fiasco has cost the company billions. Revenues have plunged 35 per cent. The shares have followed the same path as those two unfortunate jetliners.  Around the world Max 8s sit idle, grounded, and the airlines are looking to Boeing for compensation.

Boeing ...announced last week that it would take a $4.9 billion after-tax charge for the Max. The charge was calculated from Boeing's estimate of the cost of compensating airlines for lost use of their Max planes for several months. It did not include Boeing's potential liability from dozens of lawsuits filed by relatives of the 346 passengers who died in the two crashes.

With unsold jets piling up at the factory, Boeing is now considering whether it should shut down the line.


The Max assembly line near Seattle has stayed open, although at a reduced rate. The company even hopes to boost production gradually from the current 42 a month to 57 a month next year, but that assumes the plane will fly and Boeing will soon resume deliveries to airlines — jets have been piling up in Boeing lots since March.

"If that estimate of [an October] return to service substantially changes, then we'll have to consider alternatives," Muilenburg told analysts. "Those alternatives could include different production rates, they could include a temporary shutdown of the line."

Here's an aerial view of the congestion at Boeing Field. 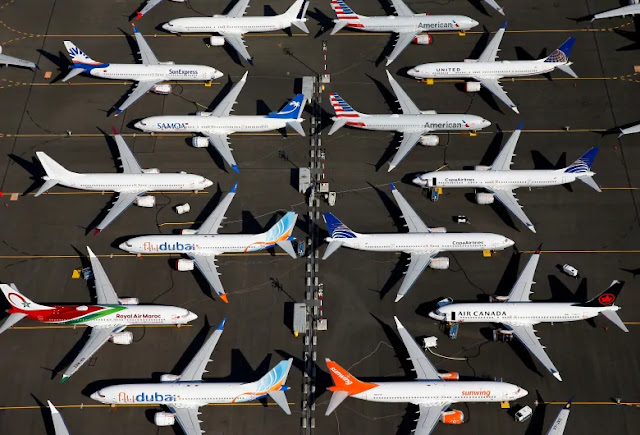 Now, of course, Nemesis is nothing more than ancient Greek mythology. Still it's not hard to imagine her, sword in hand, carving lazy circles in the sky above Boeing Field.
Posted by The Mound of Sound at 12:19 PM

I'm sure the taxpayers won't let Boeing fail, and I'll bet the CEO and other top execs will get a nice bonus, paid for with the salaries of laid-off workers. Maybe the workers will take the CEO hostage, like they've done in France.

Boeing really gained nothing from it except to punish the upstart Canadian manufacturer.

It's not just a Boeing thing, it's an American thing to punish at will.

At the end of the day the Boeing scandal is about greed much more than design error.

Boeing is still talking about a temporary production halt until they can rework the flight software. This too is hubris.

New software is just papering over a whole in the wall - it won't fix the 737 Max's fundamental problem of engines that are too large mounted too far forward on the wings. You couldn't pay me to fly in one and I'm sure I'm not alone. The sooner Boeing scraps them all the better.

Before Huawei stole Nortel and RIM technology and bankrupted them both, Eisenhower (under orders of the "military industrial complex" he warned about) brought about the destruction of the Avro Arrow. Instead of a brain drain it was more like a brain dump as lots of the engineers ended up working on Apollo

" it's an American thing to punish at will." Yes indeed which leads to the question, "What is the difference between America and Russia", not much. Anyong