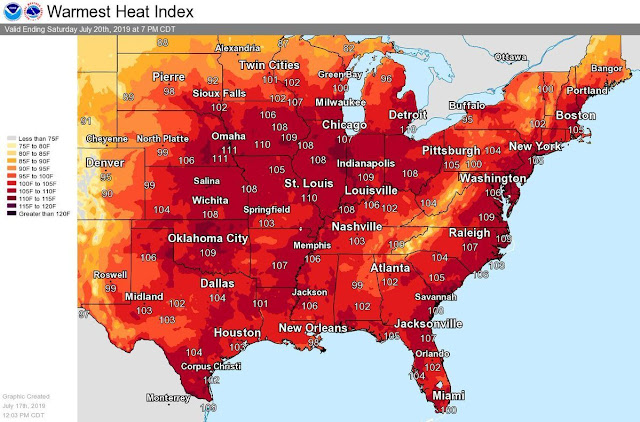 The Great Orange Whore loves to point to a snowstorm as proof that global warming is a hoax. He tends to ignore the subject entirely when America catches fire as it is this week.


Dangerous combinations of high temperatures and humidity will push the “heat index” (what the temperature “feels like”) past 100 degrees Fahrenheit from the Dakotas down to Texas and across to Maine and Florida, an area encompassing well over half of the country’s population.

...Even worse, if we fail to significantly curb emissions of carbon pollution — which is the current plan put forth by President Donald Trump’s climate policies — then these severe and deadly heatwaves will become the normal summer weather over the next few decades.

In fact, a peer-reviewed study published this week warns that if we don’t reverse emissions trends quickly and sharply, we will see a rise in unprecedented heat waves that will “break” the National Weather Service’s heat index scale.

The researchers warn we will face extended scorchers more brutal than the United States has ever experienced before. In several decades, parts of Florida and Texas could experience a heat index for five or more months per year exceeding 100 degrees, “with most of these days even surpassing 105 degrees.”

The administration’s own studies confirm this. Typical five-day heat waves in the U.S. will be 12 degrees warmer by mid-century alone, according to the U.S. National Climate Assessment (NCA), which the White House itself reviewed and approved last November.

I bumped into Kent Hehr at the Co:op today. I think he was with a friend buying groceries too, laugh, but I think he was glad-handing into the bargain. I recognised him, nodded and being a politician that's an invitation to a discussion, or a pitch isn't it. We pretty much discarded the pleasantries, smile, we got straight to the point. I know who he is and he's pretty sure I am not a conservative, small "c" or large.

I told him. "I am very disappointed the Proportional Representation conundrum could not be debated to a reasonable conclusion." He admitted, "That's on us." I did add, you could have pushed it through .. and left that an open question.

Next I added, "I am not so certain buying a pipeline to transport what will soon be stranded assets will seem like a bright idea ... in the very near future." To which I got, a yada-yada-carbon-tax response which I did not rudely interrupt, I simply interjected, "I am 72 years old. The kids need more green. Kenney is a boil on the body politic ... and actually I am shopping here. Nice to chat with you." I did not add what I was thinking, I could go on ad infinitum with my complaints about our political culture these days.

He did attempt to make some point about ... 'this riding ... which no doubt would have ended with .. do I want a Conservative government in Ottawa?' I did not say so but, NO I do not want that. What I did say was, "You guys got your chance. I am voting Green. If that's a protest vote, and it will be here, so be it." I also mentioned something to the effect that a minority Parliament might at least be a step in the right direction regarding ersatz proportional representation.

We parted on friendly terms ... if only Real Life politics were as non-adversarial?

I always thought Hehr was a pretty good guy. The adversity he's faced often brings the best out in people. Yeah, he's a Liberal in a very Red province. It would be electoral suicide for him to stand up against his leader. That doesn't make him right but it does explain why he remained friendly. There are good guys in every party, more in some and few in others.

Yeah, he's a Liberal in a very Red province. It would be electoral suicide for him to stand up against his leader.

That pretty well sums up the whole political scene.
Whilst there is diversification within the 'progressives' the right is steadfast in solidarity in it's greed.

Kent Hehr a good guy? Ask the veterans in Nova Scotia about that silly man. There he was, newly elected, supposedly going to meet Trudeau's promise of a better deal than harper's closing of VA offices causing people to drive hundreds of miles to meet a case officer, and he was going on about studying everything all over again. Might as well have been a Con. How much out of the budget was it going to cost to keep open a couple of offices already attached to local Federal buildings? He went down like a lead balloon around these parts.

Add that to his subsequent failures, and no wonder they put him out to pasture, after a stint in another "manufactured" cabinet post when he "resigned". He also received some training in avoiding sexual harrassment.

Apparently his general lack of commonsense, uselessness and acid tongue was not noticed elsewhere. The Wikipedia entry about sums him up.

.. I believe its time to present Trump, Mitch McConnell, Andrew Scheer, Jason Kenney, Doug Ford, Alex Jones, Sean Hannity etc etc et al et all (there are so many..) as 'political rent boys' - Apologies to the younger boys n men.. and certainly not an attempted critique of homosexuality. Rather, its time to label what such men are all about.. and it needs to be mean, in fact vicious, inflammatory. It needs to get at the prostitution, the 'servicing' for payment, the selling out.

I was thinking about this after reading the Mitrovica article in Al Jazeera (thanks) about Doug Ford. The current reality is yes.. there is 'service' but it is not 'public service'. I will hold (supress) fire on Justin Trudeau (for now) but will put more effort into & onto against.. Andrew Scheer & Jason Kenney (Dug Ford will self implode.. needs not my assistance.. he was born to fail) But Scheer & Kenney (and of course Trump, McConnell et al) fascinate me. They play into your previous essay on The Religion Industry.

Flawed, failed, flailing faux christians.. hell, they aint even decent human beings .. the first criteria I apply to anyone. Secondly.. they're ignorant. I saw a tweet re a bus sign yesterday, yes, there is a photo. Conservative Canada - 'We promise to cut all homeless people in half by 2025' .. Now deary me.. will that be a vertical cut - crotch through the brain or a horizontal cut across the crotch. Did that farcical boast slip past dullard Hamish Marshall - get sent to the printers & off a public transit media dept ?

Thus we find ourselves.. being 'governed' by people who can neither spell or apply critical thinking.. Does their mommy dress them still? These hustlers, grifters, carpet baggers, pitchmen accumulate megawealth.. for what ? Not 'public service' or respect for their constituents. They 'service' a special class. Did you see the Toronto Raptors accepting the trophy for NBA Champion.. ? Who got up front and center on stage.. Kawhi? Kyle Lowry? No.. it was Larry Tannenbaum of PostMedia.. Gadzooks.. what ? Megawealthy pimp, rent boy..

Nobody ever.. can say they recall me saying.. 'WoW .. its too hot' - I revel in the big heat.. turn black in the sun (Black Irish heritage, my sister is Pale Irish) .. but as a farm boy growed up, somewhat.. i fully comprehend drought, stunted crops, thirsty cattle. Our bird bath gets hit hard daily by over a dozen species of winged aviators.. Ontario (Toronto) has had timely drenchings though. Midtown Toronto has no wildfires.

But make no mistake.. the 'political rent boys' mentioned above.. have ZERO CONCERN re the common woman, man, child.. Its 'burn baby burn' - 'Drill baby Drill' .. rewrite or trash any protective legislation.. even apply retroactively.. (thanks, Stephen Harper.. for retroactive.. neat grift).. These are godless, situational ethics, scumbags on the take.. selling their asses, hell, our asses.. their lips flap re Diet Guide, Healthcare, job killing carbon tax, sex ed curriculum, morality, great again, Alberta Advantage, killing Old Age Pension, CPP, War on Iran, Invade Venezuela.. they gots their pro-Israel - anti semitism shields on full stun.. and The Saudis Are Our Friends war cry on full volume.. oops.. there they go.. off to church on Sunday.. get they sins absolved.. papal dispensation & absolution for the nation dontcha know..! Pass the collection basket..

Makes a poboy Huckleberry like moi.. get his dander up.. I'm skating with my stick higher now.. no prisoners... .. ever

ps.. a reminder.. The 5th Risk - Michael Lewis - includes astonishing chapters of course, one of which traces attempts by Trump cronies to take control of all the accumulated weather data.. for their profit. An amazing book of course.. tour de force.. bu the author of The Big Short, Moneyball, The Blindside etc..

From the NY Times ... your daily smile:

Trump’s Electoral College Edge Could Grow in 2020, Rewarding Polarizing Campaign
Re-election looks plausible even with a bigger loss in the national popular vote.