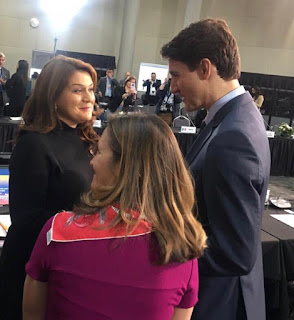 Canada has a thing for Honduras. The ravaged country is a second home to powerful Canadian mining companies and Ottawa appreciates the carte blanche treatment. Harper was quick to jump aboard when the current regime toppled the elected government in a brutal coup. Trudeau has stayed the course. Whether Conservative or Liberal, we're getting awfully good at looking the other way when that suits us. We don't seem too vexed when they're shooting students. Here's Justin and Chrystia making nice with Honduran foreign minister Maria Delores Aguero.


Tensions between the administration of President Juan Orlando Hernández and a months-old national protest movement have intensified in recent weeks and crossed the line into violence. On 24 June – four days after Hernández ordered the military to crack down on demonstrations across the country – military police burst onto the campus of the Autonomous University of Honduras in the capital city of Tegucigalpa. They opened fire on students, wounding at least four. Altogether clashes have claimed at least three protesters’ lives – and resulted in dozens more injuries (chiefly on the protesters’ side)

... in early May the government published a new penal code creating new penalties for public criticism of government figures and feeding worries that the government would use the law to suppress free expression and peaceful assembly when it is scheduled to come into effect in November. (The government has since agreed in principle to amend the new code.) The protest movement grew beyond the trade unions that were initially involved and came to include other unions, university students, human rights defenders and land rights activists; even some branches of the police joined the demonstrations. Protesters also came to focus on a new demand: calling for President Hernández’s resignation.

“We prefer a direct approach to government where citizens can bring grievances to their representatives individually, rather than through advocacy groups, protest movements, union bosses or any other distorting filters. It’s best that way.”

No thanks; I just had a banana.

.. am getting very 'uneasy' (a 'polite' term I use.. in the past it has preceded 'going molten unhappy, & lava flowing) Uneasy re OUR Government or the Liberal Government or the Government that preceded.. Harper's septic tank fail. I speak re OUR 'wishes'.. OUR 'values' .. those simplistic but truly valid 'beliefs' that most Canadians 'hold to'..

Its not complicated.. Vizualized.. it would be Trudeau not shaking hands politely with complete A-holes, murderous thugs, truly screwed up corporations, racists, scumbags.. grifters. If you wanna extirpate or exterminate habitat, species, poison lands, water, air.. well I don't recall that as 'election promise'.. I get truly uneasy then..

Playing pattycake in Venezuela or Osaka.. or Washington ?? Give me an f'en break.. Yes yes.. I get the good manners diplomatic exchange of 'courtesies' .. it has uses.. minimal uses.. then becomes joint abuses.. Bottom line.. get our asses and any military the F out of where we have 'no standing' - WE (Canadians) have no business sucking for Trump or Saudi Arabia.. or other countries.. we don't need a batch of F-35's for 'ground attack' or low level bombing either.. last I looked, the 'barberians were at the door' - ie OUR BORDER.. and their name is GOP.. and we have our own seriously flawed Potemkin cardboard political animals.. all kissy kissy with all the wrong people, the corporate donors.. flawed realtors.. or their daughter

Run for public office - represent the Dreams, Needs & Wishes of your electorate .. That is the job description, the Scope of Work.. not some convoluted Morman or Catholic backflip hysterical crapola.. or Right Left or Whacko dogma.. Get yer ass into the riding, sniff the wind, watch the parking metes, help your elders cross the street, knock on doors.. listen - write it down.. hurry yer ass back to Ottawa.. Reflect the Reality of the Riding.. the damn people who elected you.. and fer F sake if Donald Trump shoves you grab him by the tie, pull his size 90 suit jacket over his head and give him a backheeled seat on his ass .. seriously ! What's th orange fatso gonna do ? Sue you ? He sues everybody .. bury the f'er


I think Trudeau is adopting a form of realpolitik more in keeping with the United Fruit Company than our 'values' of the past. His embrace of Netanyahu is another example. Unfortunately Justin's fanboys can't see it. I still am certain Scheer would be worse. I can't figure out by how much.

When are people going to address what the problem is.....Trudeau is towing the Capitalist line. He is doing what he is "told" to do for the sake of "money" lots of it. Why has he not gone after all that money hidden is other dubious countries by Canadians? Because he CAN"T. Blathering the rule of law when it suits inside Canada while avoiding companies breaking Canadian laws overseas.

Yes, The Americans ran the Venezuelan petroleum sector, and the Canadians grabbed the mines. Until Chavez kicked 'em out and took over without much compensation. Well, Munk and the boys weren't having that, so that is why the Cons and now Justin issue utter bullshit about sham elections there and support bum boys for Prez like the delusional Guaido. Our billionaires might regain control of what they regard as rightfully theirs. A bit like propping up SNC-L, and Justin's all for it. He and Freeland lead the consortium of anti-Maduro right wing Latin American governemnts, at it well before Trump arrived on scene.

As with Honduras, Peru and in various African countries, Canadian mining is the horrific face of crap capitalism that cares not one whit about the local population or environmental concerns. We have a solid awful reputation worldwide in mining ops, second to none.

Yves Engler has documented it all over the years in Canadian Dimension and other alternative publishing sites. Done a great job on the current Venezuelan situation. Ignored at home of course. The ugly Canadian miner is a fact, and yet we think ourselves so terribly sweet. Kenney and his beloved tarsands are our in-country equivalent to our overseas mining brutes. Tarsands is just surface mining, but the victims are you and me and the land around the tailings ponds. Praise the Lord.


BM, I've been unable to get the number 88 out of my mind since I read the CBC survey released on Canada Day. The pollsters reported that 88 per cent of respondents did not trust the federal government to look after their interests.

Now it's a poll so three to five per cent either way, we all know the drill. But, Jesus, whether it's 88 or 83 or 93 isn't the point. Even if it's 80 per cent that's like you or me running a 106 degree fever. That means trouble especially as we embark on the dangerous times ahead.

Canadians know that the public interest will be subordinated to the narrow, private interest by their federal government. There was a time they might have been blase about that but now they're worried. Now they express fear, insecurity. Now they need government, progressive government, to put the welfare of the public, not the economy, not powerful special interests, as the unchallenged priority of the state. Government - Conservative or Liberal - remains, however, to the neoliberal order.