As Trump approached the podium, the presidential seal was displayed on a giant screen behind him. 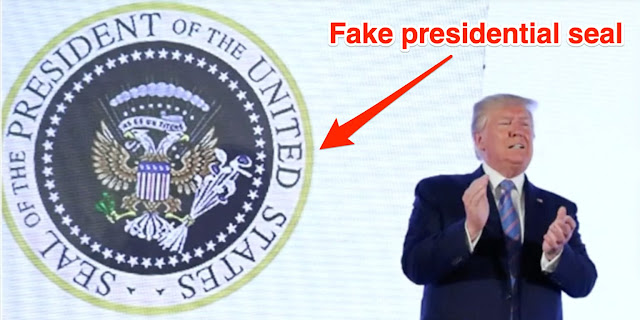 Only that's not the presidential seal of the United States. That's not a bald eagle but a double-headed eagle reminiscent of the Russian coat of arms. And those aren't lightning bolts in the eagle's claw. They're golf clubs.

No one noticed. Not the event organizers, not the loyal Trump Jungend, and, naturally, not the Cheeto Benito.

Here's a better image of the Trump Seal of Office

"and, naturally, not the Cheeto Benito."

To be fair ... he probably did notice and thought
"nice update, I must promote whoever did this."

The eagle's other claw holds a wad of cash. Over the eagle is a banner that reads, "45 es un titre" - 45 is a puppet in Spanish. The crest certainly captures the essence of the Trump presidency.

Thanks, Cap. I was trying to figure out the motto. Well done.