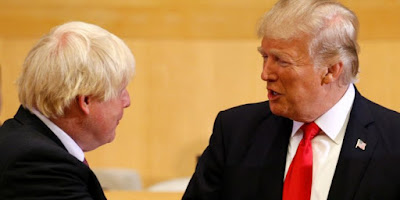 Frying pan, meet fire. Conservative party members have selected their new leader, the next prime minister of the UK, bad boy Boris Johnson. He won by a 2-1 margin over his rival. Now Terry May has to head up to Buck House to get her redundancy papers validated and then it'll be Boris turn, this time to have the Queen invite him to become the nation's prime minister.

No matter how it plays out, tranquility will not return to the realm anytime soon. Boris will have to go to Brussels to demand/ask/plead for a new deal on Brexit. He wants a new deal that the EU, having been down this road too many times, might not be interested in entertaining, especially when Johnson wants the Northern Ireland "backstop" scrapped.  However he has promised a "my way or the highway" approach with the European Union so he'll probably steer the UK ever closer to a no-deal Brexit by Halloween.

If you wonder what lies ahead for the less than United Kingdom, you can read Johnson's victory speech here.

When a new prime minister rolls into town, The Guardian cartoonists tend to come up with a suitably irreverent depiction or caricature. Here's one today from the paper's legend, Steve Bell. Will this be the new face of Boris Johnson? 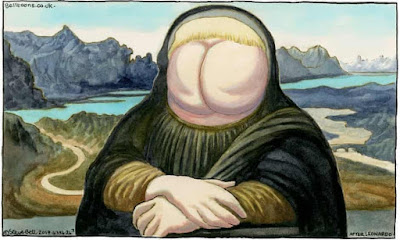 Perhaps a few "principled Tories" (if that is not now an oxymoronic impossibility in the UK) will pull the plug.

If one did not lose confidence in the "westminster model" of gov't here in Canada, after the last 20 years then the latest tragic-comedy from Britain should change your mind.

If a no-deal Brexit proceeds w/o the "Irish backstop" in place the UK will unravel.
A united Ireland will be a good thing (one hopes) as will an independent Scotland.

Those are the "good outcomes". Darker scenarios are very possible....

Here is an esp. grim view:
"It is worth looking at a copy of The New York Times dated 31 January 1933 – the day after Hitler became head of government – which is a classic example of a decent but complaisant person miscalculating the risks ahead. The writer points to the domestic opposition the new German leader would face “if he sought to translate the wild and whirling words of his campaign speeches into political action”.

The article looks forward to a “tamed” Hitler of whom it says many Germans are hopefully speaking. Overall, it plays down grim expectations, saying: “Always we may look for some such transformation when a radical demagogue fights his way into responsible office.” Judgement should be reserved until it is certain that the new man in power is “a flighty agitator” who would force the German people “to take a leap into the dark”.
"Trump is certainly dividing America, but then America has always been divided over race and the legacy of slavery. The divisions of the Civil War 160 years ago are the core political divisions of America today.

In Britain, the political polarisation stemming from Brexit is much fresher, getting deeper, more uncertain, and – at the end of the day – involves a very risky leap in the dark."


Boris, echoing the sentiment of a good segment of Leavers, has said that losing Northern Ireland would be an acceptable price to pay for leaving the EU. If, upon becoming PM, he repeats that remark he'll promptly lose the DUP votes without which his government will fall. Chaos ensues.

Mound, the Irish/UK situation can be very confusing.

Don't count on DUP to control Boris. DUP is against the backstop ... they see it as part of the re-uniting Ireland thing.

DUP likely prefers a military solution ... it worked so well before 1994.