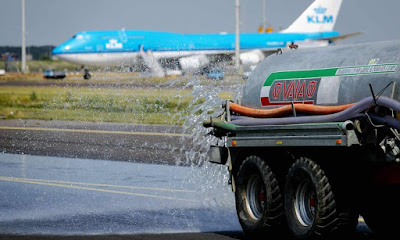 It seems like just last month that Europe was enduring a heatwave that saw a pile of all time temperature records broken.  Wait, why it was just last month.

Ah, those pesky Europeans, they're back at it. They just can't stop breaking records. What, June wasn't hot enough for you guys?

The Dutch meteorological service, KNMI, said the temperature reached 39.1C(102F) at Gilze-Rijen airbase near the southern city of Tilburg on Wednesday afternoon, exceeding the previous high of 38.6C set in August 1944.

In Belgium, the temperature in Kleine-Brogel hit 38.9C, fractionally higher than the previous record of 38.8C set in June 1947. Forecasters said temperatures could climb further on Wednesday and again on Thursday.

“The most extreme heat will build from central and northern France into Belgium, the Netherlands and far-western Germany into Thursday,” said Eric Leister of the forecasting group AccuWeather, with new all-time highs also possible in Germany and Luxembourg.

It doesn't help that so much of the architecture is not Anthropocene-ready. Old buildings overheat and ventilation can be limited. It's not just apartments either. The Guardian photo above shows tankers watering the taxiways at Amsterdam's Schiphol airport. The taxiways are melting? I don't think the Dutch signed up for that when they were designing Schiphol.

The French are dealing with heat compounded by drought. That's a one-two punch when you're trying to cool a nuclear reactor to generate electricity needed for cooling.


Paris is its driest in almost 150 years and temperatures across Europe are reaching extreme levels, scorching fields and shutting power plants.

As temperatures climb across Europe, peaking on Thursday in Paris and London, the effects of extreme weather are becoming clearer. Electricite de France SA cut its nuclear output because river water is too warm to cool plants, power prices have jumped and farmers are frustrated by another bad spell for crops.

...Electricite de France has reduced output at two nuclear reactors at its St. Alban plant by as much as 55% in the coming days due to warm river water. The company, which produces about three-quarters of France’s power, already halted two reactors at Golfech this week, as the Garonne river is too warm for cooling the plant. EDF has said it will prepare nuclear plants to operate in more severe heatwaves in the coming decades amid a changing climate.

With the Arctic region already ablaze, the heat wave in the south is moving up into Scandinavia. Last month, the online Swedish website, The Local, pitched Sweden as the destination to escape the June heatwave that hammered Europe to the south. That was June, this is July. Now the news outlet is warning that Swedes are experiencing the hottest July in at least 260 years.

What's the matter wid ya bye?? Not only the Americas or Europe...its the entire world swittering.