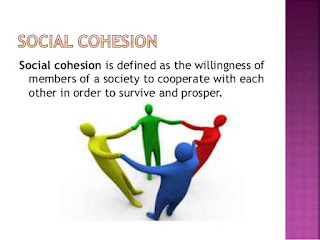 Division, paranoia, distrust, isolation. It's what happens when political partisans place party ahead of the public. That's our world today.

We live in a deeply fractured society by no means on the scale of the American rift but heading in the same direction. The worst part is that there's nothing accidental about it.

In Canada where the support of fewer than two votes out of five can reward the Conservatives or the Liberals with a majority government a divided society can work to their advantage.

I'm not suggesting there is any moral equivalence between Liberal and Conservative, there's not. Unlike the Harper/Scheer Tories the Liberals don't seek to pit Canadian against Canadian. The Liberals are content to pit the public interest against the private, corporate interest but to the extent they divide us, it's more inadvertent.

The Tories do pit us one against the other. You can tell what they're up to by the dog whistles. They're past masters at this game, East versus West, French versus English. They know their supporters' biases, their darker instincts, and play those saps to their advantage. Fear-mongering is their stock in trade. They've watched it work in the States and the Tories like what they see. It's effective, it's easy and even a moron can do it.

In my view, playing one part of the population against another for partisan advantage is borderline treasonous. It weakens the country and our society. It corrals us into camps. Communication is lost and we instead resort to suspicion and hostility. We see "the other" as our enemy.

Last week, Globe columnist Yakabuski wrote of the "diploma divide." He described a growing rift between educated citizens supporting one party, the Democrats/Liberals et al, and more poorly educated voters flocking instead to the rival party, the ruling Republicans/Conservatives.


This cultural segregation along political lines means that Democrats and Republicans no longer speak the same language or espouse common values. They are not only uninterested in hearing the other side; they are contemptuous of it.

...University of Ottawa professor Amir Attaran set off a Twitter storm this week by calling the Conservatives “the party of the uneducated,” based on Abacus Data poll showing the Tories with a 12-percentage point lead over the Liberals among Canadians with a high-school education or less. This, in Prof. Attaran’s view, is why “Conservative governments offer numbskull policy, like Buck-a-Beer,” one of Ontario Progressive Conservative Premier Doug Ford’s signature initiatives, which may or may not be as dumb as it sounds.

...you only have to look up the word “numbskull” in the dictionary to understand that Prof. Attaran did not mean his remarks to be taken as a compliment. They were a clear dig at the supposedly less-enlightened ideas of the Canadian right, which, under its current cohort of leaders, tends to celebrate know-nothingness over investigation and evidence-based policy.


One commentator recently said we're on the brink of a "political civil war."

That comment evoked another era that reminds me of this one -- the decades running up to the Civil War.

...Trump's tweets show we are now in the middle of another "irrepressible conflict." We can't forever be a country that prides itself for welcoming immigrants and religious diversity while also being one that puts immigrant children in cages and shrugs when our President makes racist statements.

Yesterday The Tyee reviewed recent polls by Angus Reid and Ekos that showed Canadians have contracted the American contagion.


...when we no longer even agree on problems, our version of democracy doesn’t work. We’re divided into camps, staring at each other with incomprehension, scorn or, occasionally, hatred.

And when the breakdown is centred on an issue that’s widely accepted as a grave threat to humanity, we’re moving away from useful political debate to destructive factionalism.

Racism is embedded in our society. Many Canadians alive today grew up in a time when overt or institutional racism was accepted. It is still part of our culture, a daily reality. The challenge is to acknowledge that reality, and do better.

But the poll results signal that many Conservative supporters don’t share that belief. More than two-thirds are prepared to proclaim that people with different coloured skin or different religions shouldn’t be allowed into the country.

While our actions have often betrayed our principles, Canadians have broadly accepted the notion that racism is wrong. It is part of the context for our society and politics.

But current Conservative supporters are rejecting that principle.

Racism is OK again, at least when it comes to immigration.

EKOS concludes something much bigger is going on. The poll results reveal a surge in support for “ordered or authoritarian populism,” it says.

To blow those dog whistles intending to sculpt a deeply divided society is reprehensible. To strive to weaken the country in this way is, in my view, treasonous. This isn't a matter of a principled difference of opinion. It is exploiting, by fear-mongering appeals to xenophobia, the known biases, fears and darker instincts of a demonstrably susceptible group.

Those who have read this blog over the years know my concern for social cohesion. Canada, like every other country, is facing huge challenges from a variety of existential threats, climate change being just one of them.

The challenges that confront us will require a degree of accommodation, occasional sacrifice and compromise unknown outside of wartime. Achieving that measure of collaboration will be difficult, if not impossible, without genuine social cohesion, trust and, from it, goodwill.

With this gathering storm we ought to be focused on resolving our differences rather than exploiting them for partisan advantage. I'm not sure that option remains open to us today but, if it does, it will take an extraordinary effort on the part of those who would reclaim it. Taking the high road today can be fraught with peril, setbacks and unforeseen consequences.

We need to be honest with ourselves.  There are those among us who persistently vilify Conservatives as "ghastly" and outside the company of "decent" Canadians. That sort of thing plays directly into the hands of those who pursue our division. It ought not to be condoned.

How do we close the divide, bridge the gap? I don't know. Obama spent both terms in office trying to overcome the politics of division but the Republicans weren't having it. Their obstinance surely paid an electoral dividend to Obama's successor, the Great Racist himself.

I don't know how to cure this contagion but if we don't find some solutions I fear we'll pay dearly for failing.

The USA , Canada and the old USSR are/were geographically huge countries diverse in culture and resources.
Perhaps a country, like empires, can become so big it collapses upon itself?

I, I think like you, know where the fault lies. Neoliberalism, for sure, but mostly it lies with a weak and complacent, ground ceding left. This weakness lies in me, too. See Democrats cowardly weakness in the wake of Trump's obvious crimes. See Lib and NDP adoption of Jim Jones inspired policies. Sure, the Cons will always be Cons. Their kind are much older than even the oral record. But the left has, but for an almost microscopic few, let us down, tacking ever toward corporate rule and planetary destruction. It seems we've given up. We're like soldiers in that trench, resigned to it all, preparing to don our gas mask, for whatever good that will do.

Surely bringing in millions of immigrants from around the world with different languages, cultures, religions, views on women's and gay rights etc damages social cohesion as well. Or are we just going to conveniently ignore that elephant in the room?


Sorry, MC, but while I've seen forces corroding our social cohesion they're home grown and not, as you suggest, the handiwork of immigrants. These newcomers are, however, a perfect whipping boy, "the other" for the xenophobes and racists at work in Canada today.

Yeah keep hiding out on 99% white Vancouver Island Mound. It's easy to be welcoming to immigrants since you havn't seen one since you left Vancouver.

Look up Toronto's Most Wanted if you want a reality check on what's happening in the cities.