The Tar Sands - Massively Dirtier Than You Imagine 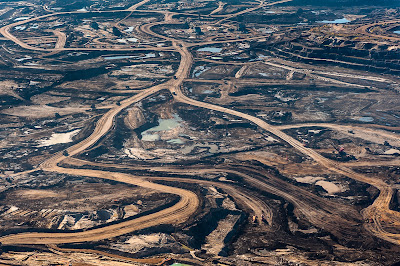 When the debate turns to Canada's bitumen trafficking the focus is usually on the greenhouse gas and other toxic emissions released when that sludge is burned. We don't tend to consider the GHG emissions from the Tar Sands site in Athabasca.

Most of us know that the United States military with its permawars in the Middle East and South Asia and all the aircraft and ships and armoured vehicles deployed around the world is a major source of GHG emissions. All those aircraft carriers and those jets and those tanks go through a massive amount of fossil fuels.  But the American military's emissions pale when compared to the emissions from the Athabasca Tar Sands. In fact there are 160 nations that have lower overall emissions than that tarry patch of northern Alberta.

And they're just getting started. When Justin Trudeau cuts the ribbon on the massively expanded Trans Mountain pipeline, operations in Athabasaca will ramp up significantly.

The United States military is one of the world's largest climate polluters — emitting more than entire European countries like Sweden or Norway. That's according to a new report that estimates the U.S. Department of Defence's worldwide emissions at nearly 60 million tonnes (MtCO2).

Here in Canada, Alberta's oilsands industry emits even more climate pollution than that. 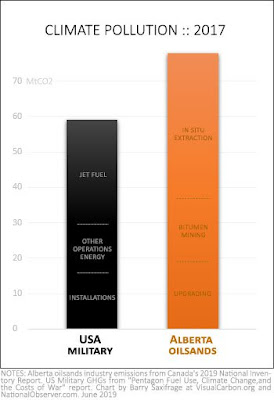 As you can see, that is one third more than the emissions from the entire U.S. military. In fact, there are more than 160 countries that emit less climate pollution than Alberta's oilsands industry.

The oilsands emissions data comes from Canada's most recent National Inventory Report (NIR). The NIR shows that roughly half of these emissions came from burning fossil methane (aka “natural”) gas to generate the heat needed to extract bitumen via the "in situ" process. The other half of emissions was split between mining bitumen and upgrading it.

There is a line and you're either on one side of it or the other. The Conservatives and the Liberals are on the other side of that line and there's nothing unfair in condemning them both for it. Scheer would be worse than Trudeau. Maybe, but does it matter? They're still both on the same side of that line. They're both chasing an illusion of easy wealth even at the cost of wrecking the climate. Nitpick if you like.

What side of that line are you on?

However it was soon put down by the people interviewed via the "Eye Opener" with David Gray. How can poor Albertans plant that many trees? If China can do it and I was there to see it which still continues today, then Canadians can. However tree planting doesn't do anything to alleviate what your blog is stating. With all the proof you would think that Jason Kenney would be more astute but no. He is hiring an Accountant to investigate where all that money coming into Canada is coming from stopping Canada from selling its synthetic oil. It will take a year to reach an answer and cost 2.2 million dollars. I know where that money is coming from me and the people I know. I've seen some of the mess around Fort MacMurray. It is disgusting. Anyong


I have worked out a detailed plan much along those lines, Anyong. Best of all it would recoup most, if not all, of the costs. That can be done.

Let me Know how.