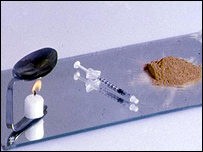 Afghanistan will always be tightly linked to the attacks of 11 September, 2001 on the World Trade Centre towers and the Pentagon. Sure the attackers themselves weren't Afghans but mainly Saudis however al-Qaeda operated out of Afghanistan with the acquiesence of the Taliban. For that the fundamentalist regime was driven from power.

The Taliban may be gone but Afghanistan is now responsible for a growing number of American deaths each year. The cause is the growing importation of top-grade, Afghan heroin into the United States.

Most heroin sold in the US is low-grade product brought in from Mexico. While the Taliban were in power and suppressing their country's opium trade, Afghanistani heroin accounted for 7% of the American supply. By 2004 that had doubled and a Drug Enforcement Agency report obtained by the LA Times suggests the amount coming in from Afghanistan to be significantly higher today.

LA County law enforcement officials believe the influx of high-grade Afghan heroin is responsible for the 75% increase in heroin overdose deaths in the past three years. Afghanistan now provides 90% of the world's supply of illicit opium.
Posted by The Mound of Sound at 11:10 AM