A Sister's Plea for Her Soldier Brother 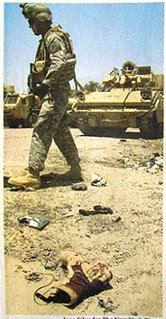 This letter from Emily Miller appeared in today's Washington Post. She writes of her brother who is on active duty in Iraq but it could as easily be written about any of our own soldiers in Kandahar:

"My brother told me that he takes his oath to defend the Constitution seriously and that he will fight and die if necessary to honor his commitment. When I asked him if he would be offended if I participated in activities opposing the war, he replied that it was not only my right but my obligation, and the obligation of all civilians opposing this war, to try to change bad policy. "Give us good wars to fight," he said.

"For the record, he believes that the war on terrorism is necessary to deal with real threats facing the United States. He is not convinced of what Iraq has to do with the matter, which puts him fairly well in the mainstream of American opinion.

"So it is terribly upsetting to me to hear that some people despair that there is "no point" to their soldier's death or wounding in the Iraq war. America does not have to be right in order for our soldiers' service to have meaning.

"What I find offensive is the idea that we have to "follow through" in order to give their deaths meaning post hoc. It is dreadfully apparent from the Iraq Study Group report that Iraq isn't going to have a democracy in any meaningful time frame. Even if this administration does everything perfectly, the best-case scenario is that we might maintain the barest outlines of order.

"Victory being out of the question at this point, the only democracy my brother is fighting for in Iraq is our democracy. The only constitution he is in Iraq fighting to defend is our Constitution. If my brother dies, it will not be for a mistake but rather because of his deeply held belief that the time it takes us as a people to figure out through democratic processes that we are wrong is more important than his own life.

"This places upon us an obligation. My brother and other service members living and dead have given us the sacred responsibility to use the democratic means we have at hand to bring judgment to bear on whether any given war is worth our soldiers' lives.

"It's not too late for us to honor the almost 3,000 U.S. service members who have died defending the principles of our democracy. It is morally imperative for us to honor our living service members and to do what is demanded of us by our democracy and by common decency. We have taken a small step by changing some of our leadership in Washington, but now it is upon us to follow through at home and demand accountability from our leaders.

"What are you, fellow citizens, willing to do to defend our Constitution? Will you dignify the sacrifices of our soldiers? Will you honor my brother's faith in our system? Will you let my brother or others die to eke out a slightly smaller disaster in Iraq? These are the questions we face in the wake of the Baker-Hamilton report.

"My brother is betting his life that you are not going to ask this of him. He has placed his trust in the idea that we will not ask him to die for anything less than the necessary defense of our democracy. Reasonable people may at one time have disagreed about the necessity of the Iraq war, but now that it has become abundantly clear from every quarter that we cannot win, will you be responsible for asking my brother to stay?