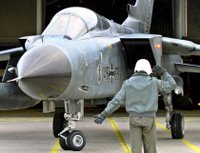 According to Spiegel Online, Germany's Luftwaffe is answering NATO's call to provide Tornado bombers and reconnaisance aircraft to the mission in Afghanistan. The request has apparently been approved by the German government.

The Spiegel story also offered a window into the current state of the Afghan capitol, Kabul. Our media focus on where Canadians are fighting, in Kandahar province. If the rest of the country is mentioned at all, it tends to be dismissed as "behind the lines", well out of danger. Apparently not:

"German Defense Minister Franz Josef Jung's trip to Afghanistan could have been one grand photo op. Picture him joining his soldiers to drink mulled wine, as Germans are fond of doing before Christmas. Or think of the elaborately decorated Christmas trees in the headquarters of NATO's International Security Assistance Force (ISAF) on Great Massoud Road in central Kabul. But German soldiers will be celebrating Christmas this year without their defense minister.

"Jung cancelled his trip to Afghanistan on Monday. The weather there was so bad that the politician's twin-engine Transall transport aircraft wouldn't have been able to fly over the 5,000 meter (16,404 feet) mountains north of Kabul, the Defense Ministry in Berlin reported.

"But that was only half the story. The other half is that security experts feared for their boss' life. The daily status reports from the armed forces' operational headquarters indicate an unacceptably high threat for the minister to travel.

"The situation in Kabul is more dangerous than it has been for a long time. Taliban fighters have gotten a foothold into the city's suburbs and are gradually infiltrating the Afghan capital from there. The city's southern districts have become a "gateway" for suicide attackers and armed fighters, according to a confidential report issued to Jung. Together, those facts paint a "picture of a staging and deployment area in the vicinity of the capital," that could impact "negatively on the security situation."

Taliban fighters in Kabul? Insurgents staging and deploying into the capitol? Odd that Canadian reporters haven't mentioned this because it puts the current status of the insurgency in a completely different light. Kabul, we've been told, was supposedly safe for Hamid Karzai and his troubled, fledgling government. Apparently we're not getting the whole story.
Posted by The Mound of Sound at 6:27 PM