Just What is Israel Doing in Gaza? 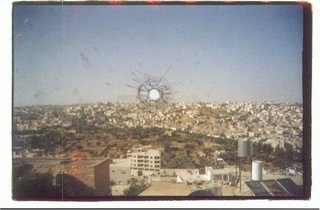 There are some people who want you to know. They're former Israeli soldiers who served in Gaza and they're not at all proud of what their army did and is doing there. The Toronto Star interviewed one of them, Yehuda Shaul, who spent over a year in Gaza guarding Israeli settlers:


"He recounted the moment when, three months before being released from the army, he was alone and wondering what he would do upon returning to civilian life.

"It struck him, he said, that he had become "a monster," doing things that were not right. "It was a frightening moment."

"He spoke to fellow soldiers. "They were feeling the same: `Something's rotten here.' Israelis don't know what goes on here, and we must tell them.'"

"Within three months of being discharged in March 2004, Shaul and friends mounted an exhibit, Bringing Hebron to Tel Aviv. It had powerful photos and video testimony by 64 soldiers showing and describing the treatment meted out to Palestinians by the troops as well as some of the settlers.

"There were pictures of Palestinians bound and blindfolded. There was a photo of a settler carrying an assault rifle with a decal on the magazine clip: "Kill 'em all, Let God sort 'em out." Another was of graffiti on a wall: "Arabs to the gas chamber." 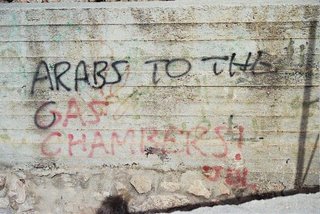 "Other soldiers who had served in the West Bank and Gaza came forward. More photos were gathered, as well as about 400 audio and video testimonies.

"In them, soldiers talk about the total power of the occupiers over the occupied — throwing Palestinians out of their homes; making them stand for hours for disobeying the curfew or trying to bypass a checkpoint or even smiling or arguing at the wrong time, Shaul said.

"We can play with them. This is the mindset from which everything flows."

"We had three high posts, two where we had kicked the Palestinian families out of and the third was a Palestinian school which we had closed down.

"The idea was that anytime they shoot, we shoot back.

"But the machine gun is not an accurate weapon. You just shoot in the direction of the target ... We have no idea how many we killed. I hope no one."

"Shaul said some acts "flow from being afraid or being bored. You are there eight hours a night at the post. You just aim and shoot the water tank."

"Or, "when you drive your tank or your APC (armoured personnel carrier), you bump into a streetlight. As you turn a corner, you bump into a wall. It's fun ... It's all about you. Nothing else matters ... Palestinians are no longer human."
Posted by The Mound of Sound at 11:20 AM