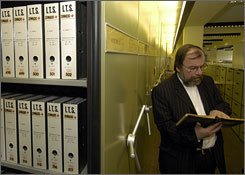 For half a century the International Tracing Service has been the repository of millions of documents revealing the horrid details of the Nazi's death camps.

Now these archives are finally being opened for inspection and the passage of time hasn't done anything to quell the grotesque and heinous misery they relate. An AP reporter has had a chance to take a first look:

"The "pyramid" ranged from death camps such as Auschwitz at the top, to secondary and tertiary detention centers. There were 500 brothels, where foreign women were put at the disposal of German officers, and more than 100 "child care facilities" where women in labor camps were forced to undergo abortions or had their newborns taken away and killed - usually by starvation - so the mothers could quickly return to work.

"The earliest prisoners were communists, Social Democrats, Jehovah's Witnesses and other political opponents, as well as homosexuals and common criminals. The Final Solution, which ultimately would claim 6 million Jewish lives, had not yet begun.

"Survivors have described the camps in agonizing detail, recounting unbearable suffering and calculated brutality. But historians have long sought to know more about the inner workings of the camps, hoping to draw on the Germans' own firsthand accounts and paperwork.

"Couched in patronizing and dehumanizing language, documents from the earliest camps foreshadow a system that would define the word "genocide." They show that years before the mass-scale killings began at death camps such as Auschwitz, the intellectual groundwork of viewing categories of humanity as subhuman was already in place.

"The records include two camps previously known to the Washington researchers, but about which few SS documents were available. Sachsenburg and Lichtenburg in eastern Germany were among the first sites opened in early 1933, but were closed in 1937 when the system was restructured into larger camps that housed tens of thousands of prisoners. Afterward, both served briefly as women's camps.

"The ITS files will be a boon to the researchers in Washington, who are compiling a seven-volume encyclopedia of all known sites where "undesirables" were detained, tortured, put to work or killed. The first volume is in the final editing stage - probably too late to take advantage of the Bad Arolsen archive.

"'Most historians didn't have a grasp of the scope of the whole universe of camps and ghettos,' he said. 'Each of them knew their own little slice.'

"When they began work six years ago, Megargee said the researchers estimated 5,000 to 7,000 sites existed. "Based on our research, it is now clear that there were over 20,000 such sites in Germany, in German-occupied territories and in the states allied with Nazi Germany," he said."

It will probably take many years for most useful information to be harvested from these documents. In the meantime we'll be greeted with glimpses into a dark and monstrous side of human nature. As you read these accounts ask yourself if it could happen here.
Posted by The Mound of Sound at 10:18 AM