We'll Get Back to You on That 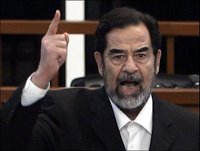 Saddam Hussein's top lawyer is imploring world leaders to push to have his condemned client treated as a prisoner of war deserving protection.

Prisoner of war? What war? Saddam wasn't really in a war when he committed the crimes for which he's been sentenced to hang. Nice try but it just doesn't fit.

Right now Saddam remains in custody in an American military prison. He'll stay there until he's handed over to the Iraqis on the day of his execution. Why on earth Saddam wasn't handed over a long time ago is a mystery. Now the Americans will needlessly be directly connected to Hussein's execution.
Posted by The Mound of Sound at 10:31 AM

In this world, the real threat to peace is those who dont recognize, what reality is, for instance, Hussein is accused of war crimes, and so is bush, milosovic, taylor, blair, the only difference is that hussein must be silenced, otherwise if he was given a fair trail, we might find out, what the truth is, and the americans dont want us to know, so they depend on people...like you, twisting reality and making sure, what really happened, stays as a conspiracy theory...majority of this world wants him at the hague, where international justice is....not with puppets of the americans, who stayed away in america, all cosy, while their familly was been pull appart by 4 horse, according to these cowards...havent u figured out that they want him dead, pretty quick???did u know more people have died under bush in Iraq, than s. Hussein?or r u one of those who says...we are right and they are wrong.....without looking????mmm???

People like me twisting reality? You'll have to do better than that. I also believe the ICC should have handled this case and that there was no chance Saddam could get a fair trial in the circumstances. As for my outlook on how many Iraqis have died in this war, you should read my earlier posts and you wouldn't come to the conclusions you've stated.