What Would that Other George Do? 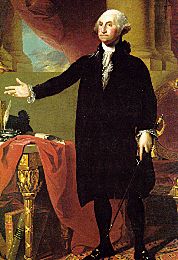 The Los Angeles Times asked scholars to consider what renowned military leaders from the past would have made of the quagmire George Bush has created in today's Iraq. They looked at the Iraq dilemma from the perspectives of Julius Caesar, Genghis Kahn, Abraham Lincoln and George Washington.

Of the four, I found the Washington analysis the most interesting. Written by Joseph Ellis, a Pulitzer Prize winning historian and author of "His Excellency, George Washington" the assessment is genuinely eerie. Here are some excerpts from the article:

Ellis begins by asking Washington this question; "Can a powerful army sustain control over a widely dispersed foreign population that contains a militant minority prepared to resist subjugation at any cost?"

"Washington would recognize the strategic problem immediately, because it is a description of the predicament facing the British army in the colonies' War for Independence.

"And, more than anyone else, Washington's experience during the war as the leader of an American insurgency allowed him to appreciate the inherently intractable problems that faced an army of occupation in any protracted conflict.

"Until the winter of 1777-78 at Valley Forge, Washington thought of the war against Britain as a contest between two armies. When the British army presented itself for battle, as it did on Long Island in the summer of 1776, Washington felt honor-bound to fight — a decision that proved calamitous on that occasion and nearly lost the war at the very start. That's because the British had a force of 32,000 men against his 12,000. If Washington had not changed his thinking, the American Revolution almost surely would have failed because the Continental Army was no match for the British leviathan.

"But at Valley Forge, Washington began to grasp an elemental idea: Namely, he did not have to win the war. Time and space were on his side. And no matter how many battles the British army won, it could not sustain control over the countryside unless it was enlarged tenfold, at a cost that British voters would never support. Eventually the British would recognize that they faced an impossibly open-ended mission and would decide to abandon their North American empire. Which is exactly what happened.

"The implications for U.S. policy in Iraq are reasonably clear, and they pretty much endorse the recommendations of the Baker-Hamilton Iraq Study Group. Like the British decision to subjugate the American colonies, the Bush decision to democratize Iraq has been misguided from the start. The administration never appreciated the odds against its success, and it disastrously confused conventional military superiority with the demands imposed on an army of occupation.

"No man in American history understood those lessons better than Washington, who viewed them as manifestations of British imperial arrogance, which he described as "founded equally in Malice, absurdity, and error." If dropped into Baghdad, he would weep at our replication of the same imperial scenario. "

Thanks, George, we needed that.
Posted by The Mound of Sound at 10:42 AM