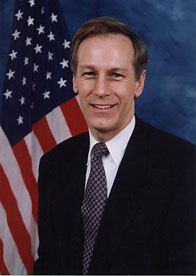 This ignorant son of a bitch is Virgil Goode, Republican congressman from the great state of Virginia.

This unrepentant bigot in the best Southern tradition wrote a letter to his constituents earlier this month expressing his fury that Minnesota Democratic Representative, Keith Ellison, intends to be sworn in on the Koran when he becomes the first Muslim congressman in American history.

Goode told Fox News he wants to limit legal immigration and end "diversity visas," which he said let in people "not from European countries" and from "some terrorist states."

In his letter, Goode warned that if Americans "don't wake up and adopt the Virgil Goode position on immigration there will likely be many more Muslims elected to office and demanding the use of the Koran."

Ellison told CNN that he could trace his ancestors to Louisiana as far back as 1742. "I'm about as American as they come," said Ellison, who converted to Islam in college.

Radio host Dennis Prager, who has said Ellison should quit if he can't be sworn in with a Bible, was criticized Thursday by the U.S. Holocaust Memorial Museum in Washington.

Prager is on the museum board, and critics sought his ouster. The board executive committee didn't go that far but called Prager's view "antithetical to the mission of the museum as an institution promoting tolerance and respect for all peoples regardless of their race, religion or ethnicity."

Take a good look at the ugly face of today's Republicans, the good old boys of the Deep South. Then take a look at our own radical right-wing and ask yourself if they're all that much better.
Posted by The Mound of Sound at 11:18 AM

This is not the face of today's Republican party. He does not represent anything except his own twisted opinion. Until yesterday he was a nobody, anonymous representative except to his district.

It certainly demonstrates your ignorance to presume that Republicans are all GOB's from the South. They most certainly are not, and are not at all radical (I am not a GOB, live in the North, and am of Hispanic descent) . While there are a FEW loud extremists spouting idiotic statements such as this (you don't hear him complaining about Jewish legislators bringing a Torah to their swearing-in), I submit that there are many loud extremists on the left that cannot get enough exposure for the hatred they profess for all things conservative. One tiny (admittedly poor) example: you called this idiot a son-of-a-bitch. Was that really necessary? You could have called him a bufoon, or a jerk, or an idiot, just plain ignorant, or plenty of other non-inflammatory names. It sounds you really HATE this guy. I don't mind cussing - I do plenty of it myself (especially when driving!).

Please remember that the GOB's of the deep South were mostly Democrats, and that Democrats stood in the school-house door to protect segregation and prevent integration (see George Wallace, former Governor of Alabama). Today's Democrats want to re-segregate schools because they have bought into the stupid belief that mostly white-teachers cannot teach "children of color" because they could not possibly understand the (imaginary) oppression that those children suffer every day by the "priviledged, white society." I think this kind of a position is extreme and idiotic; but, they are free to express themselves. I do not have to agree with them, and I am free to express my opinion.

I would agree with limited legal immigration from all countries. Our resources are limited. Shouldn't we limit the number of new entries so that current systems and programs in place to help new immigrants aren't over-loaded? Shouldn't we limit immigration to those that have not committed heinous crimes (i.e. murder) in their originating country? Shouldn't we give pereference to those that are willing to follow our laws in immigrating to our country, rather than those who disregard the laws of the land by coming here legally?

Another good example of left-wing extremism can be found at the following link:

I hope you're right. The GOB's once were Democrats. That ended when Lyndon Johnson pushed through civil rights legislation. They've been GOP GOBs ever since. As for the Repubs being the party of the deep south, you can argue that with Lincoln Chafee, a former Republican Senator who says just that.