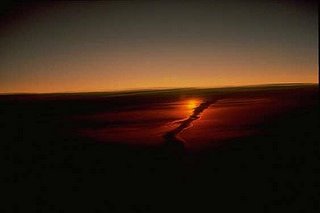 The Chicago Tribune today warned readers to brace themselves for a powerful Christmas day storm driven out of the Pacific by a massively-powerful jet stream:

"...the potential for a second powerful storm, which could take shape late this weekend in the Gulf of Mexico then swing north toward the Midwest Christmas Day and night (Monday and Monday night) is linked to the future movement of a pocket of powerful 230 mph jet stream winds observed Tuesday over the Pacific. Winds of that strength, even at jet airplane altitude, are rare and have major meteorological implications. A 190+ m.p.h. speed max produced last week's crippling Pacific Northwest storm which sent hurricane strength winds roaring through the region's mountains and set a new Montana wind record of 165 m.p.h. at Snowslip Mountain in Glacier National Park last Wednesday. The new, even stronger speed max aloft is to drop surface pressures precipitously in the western Gulf of Mexico when it arrives there Sunday."

And, as the Times of London explains, this very same jet stream, coupled with an unusually warm Atlantic ocean, is to blame for northern Europe's bizarre winter weather:

"This year, the summer and autumn were unusually hot, boosting the warmth on the surface of the sea. A strong flow of southwesterly wind has swept over that sea and blown that warmth across western Europe. The driving force behind that flow has been a vigorous jet stream. This river of wind a few miles high is created by cold Arctic air colliding with subtropical air. At this time of year the Arctic air moves farther south, setting up a greater clash and driving the jet stream faster.

"For several weeks the jet stream has been at speeds of more than 200mph and taking direct aim at Europe, driving depressions and warm air deep into the Continent. Why it has taken such a direct course, and why it is so fast, is less certain."
Posted by The Mound of Sound at 9:57 AM