Another Trip for Demjanjuk 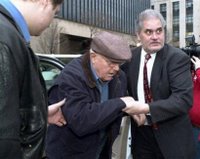 John Demjanjuk. Think about the name. Let it settle in and try to remember.

Alright. 25-years ago John Demjanjuk was big news when the retired Ohio auto worker was arrested, stripped of his US citizenship and extradited to Israel where he was sentenced to death after being found to be the Nazi concentration camp guard "Ivan the Terrible."

The death sentence was set aside by the Israeli supreme court after records from the former Soviet Union showed another man was probably the infamous Treblinka guard. Upon being released Demjanjuk returned to the US where his American citizenship was restored in 1998.

Four years later his citizenship was stripped again when the US Justice Department showed that Demjanjuk had worked for the Nazis as a guard at three concentration camps.

Now Demjanjuk is fighting deportation to his native Ukraine. His appeal of a deportation order has been dismissed. It seems he continues to fight to stay in the United States.
Posted by The Mound of Sound at 9:38 AM