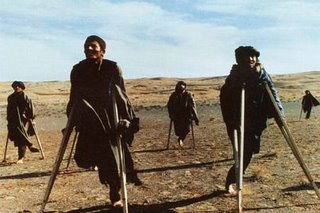 Pakistan says it's going to build fences and establish minefields along parts of its border with Afghanistan. The Karzai government wasted no time dismissing the effort as an empty gesture.

Given accounts from US and NATO forces as well as Western and Asian reporters that Taliban insurgents already simply walk freely through border checkpoints this measure does indeed seem little more than window dressing.

Meanwhile, in Baghdad, Iraqi officials have confirmed that Saddam Hussein and two co-defendants have had their death penalty conviction appeals dismissed. Iraqi law requires the condemned to be executed within 30-days. This may be the end of the road for Sad Man. Oh dear.
Posted by The Mound of Sound at 6:48 AM