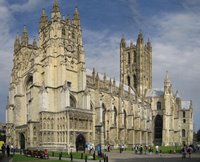 Archbishop Williams has lambasted Blair and Bush, saying their "ignorant" policies in Iraq have endangered Christians in the Middle East. He said that Muslims now tend to see all Christians as supporters of the "crusading West." By the way, that's not a good thing if you're hanging out in a Muslim country.

"This Christmas, pray for the little town of Bethlehem, and spare a thought for those who have been put at risk by our short-sightedness and ignorance," Williams wrote in an article for the London Times newspaper.

Williams, who is not shy of controversy, has long been a critic of the Iraq war, saying there was no moral basis for military intervention.

He said the consequences of Anglo-American foreign policy have been the erosion of good relations between the Muslim and Christian communities and made Christians an increasing target for Muslim extremists.

"One warning often made and systematically ignored in the hectic days before the Iraq War was that Western military action ... would put Christians in the whole Middle East at risk," wrote Williams.

Meanwhile President George Bush got in a few spiritual licks of his own. In his Saturday radio spot, he urged Americans to pray for their troops in Iraq. He also told US soldiers in Iraq not to fret, victory is just around the corner.
Posted by The Mound of Sound at 8:01 AM