The Trouble with Bombs 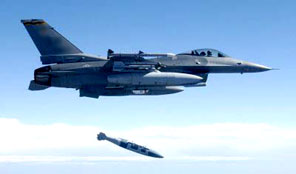 Modern air superiority is a truly awesome power, especially to friendly troops when they're outnumbered. Being able to call in airstrikes on an enemy can make all the difference in winning and in the casualties our soldiers have to take in order to win.

Airpower is a blunt tool. Although targets can be hit with real precision, the killing zone of these weapons too often makes that precision meaningless for non-combattants who just happen to be in the general proximity of the target.

A fundamental tenet of guerrilla warfare is for the insurgents to mingle with the general population. Dress the same, look the same, make it difficult if not impossible for the conventional or government forces to tell the guerrillas from the civilians. The bad guys can not only hide among them but they can maneuvre through them at will. This tactic also makes it difficult if not impossible not to kill civilians in the process of attacking insurgents.

The bad guys get to use the innocents as camouflage, as conduits to come and go unmolested and also to get the government forces to turn its weaponry on the very people they're supposed to be protecting.

The families of those killed or maimed may curse both sides but, above all else, they remember who dropped the bomb on their loved ones.

An insurgency is a political war. The guerrillas set the rules and it is the guerrillas who hold the iniative. We can condemn the insurgents for using civilians as human shields and can blame the civilians for allowing the insurgents to exploit them. Maybe that's good for easing our collective conscience at the sight of the carnage from our aerial devastation but it is meaningless to the war we have to fight.

We rely on heavy air support because we're forced to rely on it. That's the unavoidable price of waging war on the cheap, of fielding a force far too small to hold its own without the assistance of aerial bombardment. Our salvation is also our defeat. From the Christian Science Monitor:

"...with so few boots on the ground, the increased reliance on air power has led to thousands of civilian deaths. The devastating air offenses are undermining support for the Afghan government, say human rights workers and Afghan officials, and are turning public opinion in the four southern provinces of Afghanistan against NATO forces, who took command of the south from the US in August.

"US aircraft fired more bombs in the first six months of this year than in the first three years of its campaign against the Taliban, according to figures released by the Pentagon.

"President Karzai's meeting last Tuesday of NATO and US generals, ambassadors, and Afghan ministers in Kandahar - southern Afghanistan's largest city and a former Taliban stronghold - was an attempt to examine better methods for tackling the insurgency and curbing civilian deaths.

"But even as top military officials met, NATO troops posted at a checkpoint in Kandahar shot and killed a local tribal elder who was driving a motorbike. The man had failed to heed warning signals as he drove to the meeting with Karzai.

"The Tuesday visit came three days after Karzai wept openly on national television about his helplessness to protect the Afghan people from US, NATO, and Taliban violence.

"'We can't prevent the coalition from bombing the terrorists, and our children are dying because of that,' he said with tears in his eyes during a speech to mark International Human Rights Day, Dec. 10. At the Kandahar meeting, Karzai saved some of his harshest criticism for his Pakistani neighbors, a country he says has been actively helping the Taliban.

"NATO's strategy has eroded support for its mission as well as for Karzai - nothing could be more telling than Karzai weeping and complaining about NATO killing Afghan civilians," says Sam Zia-Zarifi, Asia research director for Human Rights Watch.

"By providing much-needed financial aid for the families of victims killed by airstrikes, the Taliban has been able to garner support in the southern provinces, says Sarah Holewinski of the Campaign for Innocent Victims in Conflict (CIVIC), a Washington-based human rights group.

"'If NATO doesn't find a way to win the trust and support of the Afghan people, the Taliban will,' she says. 'In fact they already are.'

"Fighting against Taliban insurgents who are dressed in civilian clothes and hidden among the civilian population is a difficult task. But the sharp escalation in violence has many southern Afghans asking whether NATO troops are making their lives safer or, ultimately, more dangerous.

"Many Afghans in Kandahar say that they would prefer NATO convoys to avoid the city, because they act as magnets for suicide bombs and the NATO soldiers tend to shoot indiscriminately into crowds."

Aerial bombardment in civilian areas can help NATO win battles but it might well cost them the war.
Posted by The Mound of Sound at 12:35 PM