Has Mugabe Finally Hit a Wall? 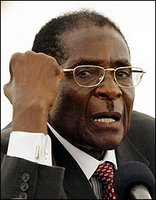 The name Robert Mugabe has become synonymous with "excess" and "abuse." For years he's thumbed his nose at the world while brutally repressing the people of Zimbabwe.

Recently there were reports that Mugabe had decided to extend his term in office, at first by two years and then, it seemed, by ten. Everyone just expected this to be rubber-stamped by his governing party, the Zanu-PF.

Turns out that didn't happen. The Zanu-PF delegates at the party's mid-December conference refused to pass the measure. As The Guardian reports, Mugabe may finally be running out of steam - and allies:

"Zanu-PF insiders say the stiff resistance within the party to Mugabe's proposal is the first sign of the vulnerability of the 82-year-old leader, who has been in power for 26 years. It is the first time a party conference has failed to adopt a resolution supported by Mugabe, who will succeed in amending the constitution only if his proposal is passed by the central committee.

"The party's rebuke to Mugabe exposes growing dissatisfaction with his continued rule. The two major factions within Zanu-PF vying to succeed Mugabe are led by Vice-President Joice Mujuru and former Speaker of the House Emmerson Mnangagwa. The bitter foes have set aside their differences to oppose Mugabe.

"'Neither side wants to see Mugabe extend his rule. They want elections in 2008,' said John Makumbe, political science lecturer at the University of Zimbabwe. 'They united against Mugabe at the party conference and they found that the owl has no horns. That is a Shona saying meaning that they found Mugabe to be a paper tiger. Mugabe is going to have a difficult time keeping his party in line in the coming year.'

"Meanwhile, Zimbabwe's rapidly declining economy has shrunk by nearly 50 per cent since the year 2000. Inflation is the world's highest at 1,100 per cent, unemployment is estimated at 80 per cent and life expectancy has fallen to 34 years for women, the world's lowest.

"Mugabe has also alienated his strongest ally, South African President Thabo Mbeki, and leaders from other neighbouring countries who do not welcome his continued rule, according to reports in South Africa. An estimated three million Zimbabweans - a quarter of the country's population of 12 million - have fled to South Africa and Zimbabwe's collapse has slowed economic growth across southern Africa."

When brutal tyrants, like Mugabe, fall out of favour with their own it rarely ends well for them. Things tend to get ugly as the boss clings on to what once was and his rivals struggle to pry his fingers off the levers of power. 2007 could be the year of Mugabe's obituary.
Posted by The Mound of Sound at 10:37 AM