Time to Cull the Herd 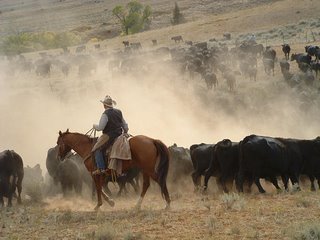 Okay, I wanted a big engine, Dodge Durango but settled for a VW Beetle. I've cut way back on my driving. I turn out my lights and keep my smallish house quite cool. I try not to waste too much water. Hey, I'm trying to do my bit.

Now it seems what I put in my fridge may be as environmentally important as the vehicle I drive. The United Nations Food and Agriculture Organization has released a report entitled, "Livestock's Long Shadow" (available for $60) which paints a vivid picture of the impact of all those critters we want for our tables. Here's a commentary from the New York Times:

"Global livestock grazing and feed production use “30 percent of the land surface of the planet.” Livestock — which consume more food than they yield — also compete directly with humans for water. And the drive to expand grazing land destroys more biologically sensitive terrain, rain forests especially, than anything else.

"But what is even more striking, and alarming, is that livestock are responsible for about 18 percent of the global warming effect, more than transportation’s contribution. The culprits are methane — the natural result of bovine digestion — and the nitrogen emitted by manure. Deforestation of grazing land adds to the effect."

Easy answer? Forget it, there isn't one. This is a problem that is going to be with us until nature culls the herd - and I'm not talking about cattle.
Posted by The Mound of Sound at 9:56 AM