A Better Way - Beyond Baker-Hamilton 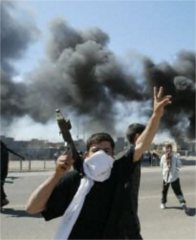 The International Crisis Group has presented a bold, even startling set of proposals to stabilize Iraq.

The ICG report contends that Washington must go far beyond the Baker-Hamilton, Iraq Study Group, recommendations if Iraq is to be salvaged.

The first recommendation is to transform the peace effort into a true, multilateral process involving all five permanent members of the Security Council, Iraq's six neighbour states, and all parties to the current sectarian conflict, not merely the existing government and security forces.

With all these parties or 'stakeholders' aboard, the second recommendation calls for prolonged, forceful diplomacy:

"...This is not a military challenge in which one side needs to be strengthened and another defeated. It is a political challenge in which new consensual understandings need to be reached. A new, more equitable and inclusive national compact needs to be agreed upon by all relevant actors, including militias and insurgent groups, on issues such as federalism, resource allocation, de-Baathification, the scope of the amnesty and the timetable for a U.S. withdrawal."

The third, and perhaps most critical, recommendation calls for a complete overhaul of American foreign policy in the Middle East:

"A new U.S. regional strategy, including engagement with Syria and Iran, end of efforts at regime change, revitalisation of the Arab-Israeli peace process and altered strategic goals. Mere engagement of Iraq’s neighbours will not do; Washington must clearly redefine its objectives in the region to enlist regional, and particularly Iranian and Syrian help. The goal is not to bargain with them, but to seek compromise agreement on an end-state for Iraq and the region that is no one’s first choice, but with which all can live."

A Crisis Group spokesman acknowledged the recommendations will be a tough sell with the current US administration: