Last Charge of the NeoCon Brigade? 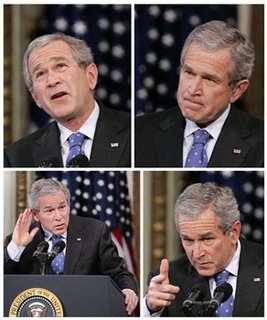 "Choosing Victory, A Plan for Success in Iraq." According to Asia Times, that's the title of a Powerpoint presentation formulated by the neocons and bought lock, stock and barrel by George Bush.

"Drafted hastily - it currently exists only as a PowerPoint presentation - by its two main authors, AEI fellow Frederick Kagan and the former vice chief of staff of the US Army, General Jack Keane, as an alternative to the report of the bipartisan Iraq Study Group (ISG) headed by former secretary of state James Baker and former congressman Lee Hamilton, it is called "Choosing Victory: A Plan for Success in Iraq".

"The title is apparently chosen deliberately to counter one of the ISG's core messages: that there is "no magic bullet" - least of all a military one - that can save what most analysts in Washington believe is the biggest US foreign-policy debacle since at least the Vietnam War.

"'Alone among proposals for Iraq, the new Keane-Kagan strategy has a chance to succeed,' declared this week's Weekly Standard, which, like the AEI fellows involved in the 'Victory' project, was a major champion for going to war in Iraq."

So this is why George Bush has rejected or overridden the advice of his generals. The neocons have grabbed his ear again. Theirs is the only message Bush has heard that speaks of victory rather than defeat. By the way this is Fred Kagan, Bush's warfighting genius:


"'According to all the talk in Washington, the 'plan' whipped up by AEI's Fred Kagan is likely to be mostly implemented by President Bush when he stops stalling about his policy in Iraq,' said Pat Lang, the former chief Middle East analyst at the Pentagon's Defense Intelligence Agency, who has warned that, if implemented, it would likely lead to "Stalingrad on the Tigris".

"'A 'surge' of the size possible under current constraints on US forces will not turn the tide in the guerrilla war,' warned Lang, who noted, along with many other experts in the past month, that the reinforcement of thousands of US troops in Baghdad since last summer had actually increased the violence there.

"'Those who believe still more troops will bring 'victory' are living in a dangerous dream world and need to wake up,' he added, conceding, however, that it may appeal to Bush for that very reason. 'He wants to redeem his 'freedom agenda', restore momentum to his plans, and in his mind this might 'clear up' Iraq so that he could move on to Iran.'"