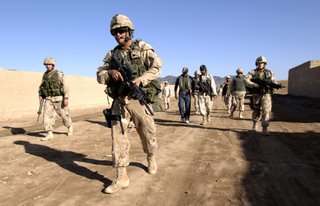 It's entitled "FM 3-24 Counterinsurgency" and there should be a copy on the desk of each MP when parliament reconvenes.

There aren't many nations that have had as much experience at losing to insurgencies as the United States. That's why, when the Pentagon takes stock and comes up with what they were doing wrong, those new to the counterinsurgency business - such as Canada - should stand up and take notice.

I posted an item about FM 3-24 a couple of months back but The Economist recently published an article on it:

"These days, ...American commanders are reaching for the history books as they discover that high-tech firepower is of little use—and can often be counter-productive—in the streets of Baghdad. Some have sought inspiration in classics such as T. E. Lawrence's “Seven Pillars of Wisdom”, published in 1922, or the Marine Corps' rediscovered “Small Wars Manual” of 1940. On December 15th they got some official help in the form of a new joint army and marines field manual.

"FM 3-24 Counterinsurgency” makes awkward reading for those trained in the notion of out-manoeuvring and annihilating an enemy force. Now American troops must be “ready to be greeted with either a handshake or a hand grenade” and must be “nation-builders as well as warriors”. Under the new doctrine, fighting insurgents involves “armed social work”.

“Sometimes doing nothing is the best reaction,” says the manual. The best weapon is sometimes none at all. The prime objective is not to kill as many insurgents as possible but to maximise support from the local population. Above all, troops must adapt quickly.

"Instead of isolating themselves in large camps and driving around in armoured vehicles, the manual advises American troops to live “close to the populace”, move on foot, sleep in villages and patrol by day and night. Each company should have a political as well as a “cultural” adviser. Platoons should assign their best soldiers to intelligence and surveillance, even at the cost of firepower. Forget the chain of command: decisions should be taken by consensus where possible.
Soldiering is only one strand. It must be entwined with others—including providing essential services, promoting good governance, building up local security forces and devising an information policy to counter insurgents' propaganda.

"The 282-page manual reads at times like a litany of the things America has done wrong in Iraq. But those arguing for withdrawal will find little solace. Insurgencies, it says, “are protracted by nature”. America and its allies must show the “ability, stamina, and will to win”.

"Moreover, counter-insurgency cannot be done on the cheap. It requires large amounts of manpower—some 20 to 25 members of security forces for every 1,000 civilians. The 483,000 combined coalition and Iraqi forces (of dubious quality and loyalty) fall well short of the 535,000 to 670,000 required to secure Iraq.

"If American commanders' response to Vietnam was to foreswear nasty small wars, their reaction to the fiasco in Iraq seems so far to be quite different: to learn to fight them better. The new manual is a first step, but America's military culture may stand in need of deeper change. A start might be to rewrite the first words of its “warrior ethos”, whereby every soldier declares: “I stand ready to deploy, engage, and destroy the enemies of the United States of America.”

What's the cardinal rule for Canada's mission in Afghanistan? Simple, you cannot do this on the cheap. Kandahar province has a population of 886,000 and an area of just under 21,000 square miles. For the counterinsurgency mission Canada fields a battle group of one thousand soldiers, or one rifle for every 20-square miles of bandit country.

Using the American recommendation of 25 security forces per 1,000 locals, we should be deploying a battle group of roughly 22,000. 22,000, not 1,000! Do the math Steve, you too Rick. Our force is less than 5% of the number required for effective counterinsurgency in Kandahar province.

Remember, the forces arrayed against our soldiers are probably the most-experienced and successful insurgents in history. They drove out the Brits twice and they mauled the Soviets until they left. These are not enemies we can afford to take lightly.

Oh yeah, just in case Steve or Rick or Gord are reading this post, they should check out the final release of FM 3-24 which is available, in its entirety, here:

Anyone else who is "gung ho" on the mission would do well to pore over this also.
Posted by The Mound of Sound at 11:07 AM