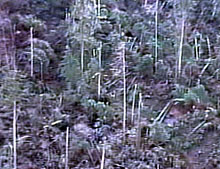 Here on Vancouver Island we're bracing for our fourth major windstorm in a week. Today's not supposed to be quite as bad as the past - winds of 80 km./hr. - but that's bad enough. It's certainly enough to send more trees, some of them weakened by the earlier storms, crashing down. It's plenty to cause more massive power outages. It's more than ample to bring down fences that were merely damaged before.

There are so many trees down in Stanley Park that officials are hoping they can get the damage cleared away in time to re-open the landmark by summer.

Around the planet, we're getting used to strange weather conditions. Australia is now in year five of record droughts. As the Times of London reports, even the Russian Bear is getting the winter off this year:

"Traditional scenes of pristine snow and ice have given way to rain and muddy grass from Reykjavik to Moscow as unseasonably warm weather puts a damper on festivities.
Russians normally revel in the bitter harshness of their winters, but the warmest December since 1879, when records began, has left Muscovites despairing about a lack of snow to see in the new year.

"Moscow experienced a record winter high last Friday of 9.3C (48.8F), far above the average of -5C. The city received a light dusting of snow yesterday for the first time this month, but it was not expected to stay on the ground for long. Temperatures are predicted to rise above freezing again before the weekend. This winter is in stark contrast to last year, when temperatures in the capital plunged to -40C in the coldest winter since 1940.

"Nature is equally confused. Flowers and herbs have bloomed unexpectedly, while mushroom picking — a pastime about which Russians are fanatical — has been possible in the forests outside Moscow.

"Even Siberia is not immune, though here “warm” is a relative term. Temperatures in Novosibirsk, Western Siberia, have risen to -3C, well above the average of -16C.

"Many of Europe’s capital cities should be well in the grip of winter by this time of year, but Riga, Vilnius, Warsaw, Budapest, Berlin, Vienna and Sofia are all wondering where the snow is — as are the Continent’s ski resorts.

"The forecast is similar for Norway and Denmark, and even Iceland is struggling to live up to its name: Reykjavik is forecast to be 10C over Christmas, with heavy rain."

I'm dreaming of a green Christmas. I just hope I won't have to spend it fixing that damned fence again.
Posted by The Mound of Sound at 9:13 AM