"At Least We Can Say We Tried" 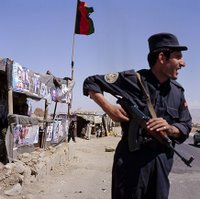 They're crooked, rotten through and through, but we're going to help make their villainy easier, more efficient. The fact that they're driving ordinary Afghans over to the side of the Taliban doesn't seem to matter to our military leaders. We've already taken sides. Here's Christie Blatchford's account:

"Yesterday, the battle group handed over a brand-new vehicle checkpoint to the Afghan National Police at Howz-e-Madad. Constructed overnight by engineers from the British 28th Engineer Regiment, the checkpoint now allows the ANP to actually divert suspicious cars or trucks to a secure area for a search. It was welcomed by ANP District Police Chief Aka Abullamrasol, who immediately asked for another such checkpoint at Zhari, a few kilometers away.

"The checkpoint should make the village safer and villagers less vulnerable to the intimidation tactics of the Taliban, Charles Company Commanding Officer Major Mathew Sprague said yesterday, but the real question is whether the ANP, a force rife with corruption will use it properly.

"'At least we can say we tried,' Major Sprague said with a shrug. Interpreters had already told him that the reason the police like the checkpoint is that it will make it easier for them to extort bribes from passing motorists."

Yes, Major Sprague, you tried and the Taliban are undoubtedly appreciative of your efforts. Ignoring realities on the ground, such as the corruption of the Afghan police and their predation of the locals, is self-defeating.

By the way Mat, the Taliban don't mind. According to Western reporters who've travelled with them, the insurgents simply pay their bribes to the checkpoint cops and sail on through unchallenged and unmolested. After all, cops getting into gunfights with the Taliban is bad for business.

Unbelievable!
Posted by The Mound of Sound at 8:02 AM