At Least it Rhymes

A lot of pundits like to compare the mess in Iraq with the American experience in Vietnam in the 60's and 70's. In many ways, however, it more closely resembles an earlier disaster, one that began in 1899.

Roughly 108-years ago, the US conquered the Philippines in the course of the Spanish-American war. A Guardian report shows how eerily similar that debacle was to what's going on today:

"The US took the Philippines in 1899 - part of what its then Secretary of State, John Hay, called 'a splendid little war'. The previous regime (in this case, Spanish-run) was quickly vanquished, with the shock and awe of superior weaponry. War had begun over American claims that a weapon of medium-sized destruction was used by the Spanish to destroy the USS Maine in Havana harbour, an accusation later considered dubious.

"Republican President, William McKinley, stated he had prayed for guidance, and the divine advice was to 'uplift and civilise' the Philippines. The Americans expected a welcome from the Filipinos, and indeed the US was seen as a liberator by many - initially. But US occupation became increasingly unpopular and a protracted guerrilla war developed. During the conflict, more than 4,000 US troops died and several hundred thousand Filipinos lost their lives during the occupation.

"An outcry swelled over civilian deaths and over US treatment of Filipino prisoners, including a torture used known as 'the water cure' (a technique similar to the 'water boarding' Vice President Dick Cheney defended as a practice in Guantanamo). Some GIs were reprimanded. Military morale fell. When a leader of the insurrection was captured and executed, some thought this would end the violence - it did not. 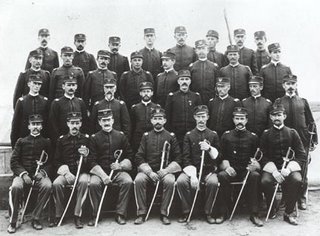 "The Americans enjoyed an overwhelming advantage in military technology, but Filipinos fought using what they had to hand. Muslim islanders, called to jihad, launched suicide sword attacks in crowded streets. Christian islanders also resisted, but there was conflict between the faiths. Those co-operating with the US were often threatened or assassinated.

"The US war with the Spanish had been planned for months, with a media campaign focusing on the barbarism of Spanish rule. But the Americans had not done their research on the people, nor did they have any detailed plans of how to administer the country. The US organised elections, but was disappointed with the politicians who emerged. It spent millions of dollars improving infrastructure, but won over few hearts and minds. Back home, enthusiasm for the war eroded. Celebrities and intellectuals voiced opposition. The media began to turn, despite the US military offering preferential treatment to journalists who gave favourable coverage. Even big US businesses that were close to the White House started to lose faith in the supposed commercial opportunities the occupation might offer. Eventually this was reflected in the polls and by 1912 the Democrats won control of both houses of Congress, ending years of Republican domination.

"The US decided to leave the Philippines in 1916, granting the islands independence as soon as a stable government could be formed. This proved harder to achieve than expected, for fear the country would descend into chaos. The Second World War intervened and sovereignty was handed back to the Filipinos only in 1946."

In other words, it took the Japanese conquest of the Philippines in 1941 to create conditions that allowed the US to bow out five years later. Here's another interesting quirk not included in the Guardian piece: both Bush and his political guru, Karl Rove, have consistently looked upon McKinley, the president whose ambitions led to the occupation of the Philippines, as their role model.

"There are important differences between Iraq and the Philippines a century before. But also surely there's been a wasted opportunity to learn lessons, by an America that, for all its virtues, does not enjoy examining the past. Mark Twain, who stood up against the Philippine occupation, wrote that, if the past does not repeat itself, it at least rhymes."
Posted by The Mound of Sound at 11:01 AM