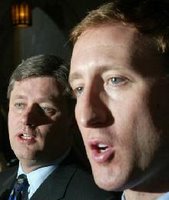 He sounds like a beauty pageant contestant telling the judges what she wants most is world peace and an end to hunger.

"I would love to, in some fashion, be able to facilitate a coming together and a discussion," MacKay told CTV in a report broadcast from Ottawa on Sunday. "And that's not to set unreal expectations – but I think we have to constantly try."

"We hope to, in some way, be able to reconstitute that discussion and perhaps find a niche where Canada can make a contribution" to the refugee situation, MacKay said.

Earth to MacKay. That "niche" you're looking for is the very one Canada spent years nurturing, the one your boss instantly torched months ago when he couldn't restrain himself from leaping straight into Israel's lap in the dust-up with Lebanon last summer.

It's nice Peter that you want to play "honest broker" but it's far too late for that now. Our credibility in that region is shot and we don't have the military or economic prowess there to get anyone to listen. Your government has placed us in America's back pocket. That's our niche now. Don't screw this up, Peter, the judges are watching.
Posted by The Mound of Sound at 6:20 AM

I can't believe i'm even wasting time answering your pathetic postings, but may I ask exactly WHAT role canada played in the middle east peace process before stephen harper became prime minister of this country?

So what exactly did he torch?


This is the first time Canada has stood up and let its voice be heard amongst the international community since mike pearson.

What's rich is that you actually believed we had a meaningful foreign policy before this government took office. What's even funnier is that you're criticizing our current foreign minister for trying to be a positive influence in the peace process (After all, aren't we canadians supposed to be peacekeepers? Right?) when the current government didn't even try. And yet you seem to have some twisted belief that Chretien's cronies built up some imaginary good will abroad.

I can't believe you're wasting your time either. I say that after having closely read your comments.