A Spring Offensive in Afghanistan? 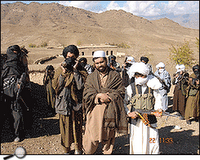 It's hard to know if they're serious but there have been several accounts in the past two months warning of a major offensive by the Taliban planned for the Spring.

If it happens at all, it might be part of a larger, general uprising against the Kabul government by a coalition that unites the Taliban, the Mujahadeen, the drug lords and ordinary peasants acting out of nationalism or grievances against the government security forces.

This general uprising threat is particularly grave for the NATO mission because it would be so decentralized as to tax, if not overwhelm, NATO's already undermanned forces in Afghanistan. You simply can't be everywhere in a country as large as Afghanistan with the limited number of soldiers available to NATO.

The reality of a general uprising, however, may be just a Taliban dream. When the Viet Cong launched their nationwide attack during Tet, 1968, they also predicted a mass uprising by South Vietnamese angry at their government. The uprising never materialized and US and South Vietnamese forces were eventually able to crush the Viet Cong to the point where they never returned as a significant threat to South Vietnam.

The Asia Times published an article today describing what the Taliban has in mind:

"The battle lines have been drawn on the Afghan chessboard for what is likely to be a decisive confrontation between foreign forces and the Taliban-led tribal resistance. Both sides have fine-tuned their strategies, have engaged their pawns, and are poised for action. The Taliban's efforts are focused on next spring, after the harsh winter weather eases, while North Atlantic Treaty Organization (NATO) forces aim to "nip this evil in the bud", using the province of Kandahar as their strategic base.

"From there, they want to contain and encircle the Taliban in their bases all over southwestern Afghanistan, according to a source familiar with NATO who spoke to Asia Times Online on condition of anonymity.

"Central to this plan is the use of air power, even though the Taliban have come down from the mountains and entrenched themselves in civilian populations in carefully chosen pockets. They also have a headquarters in the rugged mountains of Baghran Valley in Helmand province.

"To date, the Taliban have mostly engaged their pawns against NATO, with key leaders based safely in the tribal belt between Pakistan and Afghanistan. Once the final push starts, though, they will move to the fringes of the southwestern Pashtun heartland, Baghran, in preparation for the removal of President Hamid Karzai's administration in Kabul.

"Haqqani and Dadullah, on the instructions of Taliban leader Mullah Omar, are talking to tribespeople in southwestern and southeastern Afghanistan to smooth the path for the Taliban taking control. The Taliban are pledging to share everything with the tribes, including land, power and resources.

"This process is still ongoing and, according to people close to the Taliban, once it is completed the Taliban will call for a full mobilization of troops and Mullah Omar will go to Baghran to command them personally in the push to Kandahar and ultimately Kabul.

"Legendary former Afghan premier and mujahideen Gulbuddin Hekmatyar, who operates near the Pakistani side of the Afghan Kunar Valley, has become involved in his own agenda, causing a bone of contention between the Taliban and Hekmatyar's Hizb-e-Islami Afghanistan (HIA). Hekmatyar has been considered an important player in the Taliban-led insurgency.

"Hekmatyar has steadily regrouped his men, from within Parliament to the mountain vastness of Afghanistan. Most of the bureaucracy in southeastern Afghanistan, including Paktia, Paktika, Khost, Kunar, Nanaghar, Logar and Ghazni, is dominated by former HIA members who remain in contact with Hekmatyar.

"At the same time, Hekmatyar has successfully rallied his guerrillas around Jalalabad, Khost, Kunar and Paktia. However, Hekmatyar's ties with such people as Gul Agha Sherzai, the governor of Nangarhar, and previous association with Karzai stop him adopting an all-out offensive. (Hekmatyar has on several occasions been wooed by Karzai to help break the Afghan deadlock.)

"It appears that Hekmatyar, well aware that in the eventuality of an armed national uprising or Taliban victory he will play second fiddle to Mullah Omar, is jockeying to be in a position to help foreign forces achieve a safe exit from Afghanistan, in return for which he would want the leading political role.

"In these circumstances, once an uprising began, Hekmatyar would be in a straight race with Mullah Omar to reach Kabul and seize control of it.

"Once all issues between tribal leaders and the Taliban have been hammered out, Mullah Omar will move to Baghran, the northernmost district in Helmand province. It is the last Pashtun-speaking district in the southwest before one gets to the neighboring Persian-speaking western provinces, such as Ghor.

"Baghran has always been an important hub for the Taliban, serving as a rallying point to mend differences between Tajik commanders and pro-Taliban Pashtun commanders. After the fall of the Taliban in 2001, Baghran remained one of the few strongholds of the Taliban and all top commanders, including Mullah Omar, took refuge in its mountains.

"During the 10-year Soviet occupation of Afghanistan starting in 1979, Soviet troops withdrew from Baghran in the early days and never regained a foothold there, and it became the headquarters of the mujahideen. Its isolated and inhospitable terrain makes it a perfect base, and it has many escape routes through the mountain passes."

It is hard to know what to make of these Taliban pronouncements. They've been speaking openly with journalists, including some Westerners, for quite a while now. As demonstrated at the battles in Panjwai a few months ago, they're no longer simply using guerrilla tactics and will sometimes stand and fight even against superior NATO firepower.

We'd be foolish to dismiss these warnings of a spring offensive.
Posted by The Mound of Sound at 10:19 AM