All the Trouble in the World for Blair & Bush

Poor old Tony Blair. The way things are going, he'll be lucky if he doesn't get a boatride through Traitors' Gate.

It looks as though Tony was lying trough his teeth about Iraqi WMDs in the run-up to the invasion and conquest. Here's the scoop from The Independent:

"The Government's case for going to war in Iraq has been torn apart by the publication of previously suppressed evidence that Tony Blair lied over Saddam Hussein's weapons of mass destruction.

"A devastating attack on Mr Blair's justification for military action by Carne Ross, Britain's key negotiator at the UN, has been kept under wraps until now because he was threatened with being charged with breaching the Official Secrets Act.

"In the testimony revealed today Mr Ross, 40, who helped negotiate several UN security resolutions on Iraq, makes it clear that Mr Blair must have known Saddam Hussein possessed no weapons of mass destruction. He said that during his posting to the UN, "at no time did HMG [Her Majesty's Government] assess that Iraq's WMD (or any other capability) posed a threat to the UK or its interests."

"Mr Ross revealed it was a commonly held view among British officials dealing with Iraq that any threat by Saddam Hussein had been "effectively contained".

"He also reveals that British officials warned US diplomats that bringing down the Iraqi dictator would lead to the chaos the world has since witnessed. "I remember on several occasions the UK team stating this view in terms during our discussions with the US (who agreed)," he said.

"''At the same time, we would frequently argue when the US raised the subject, that 'regime change' was inadvisable, primarily on the grounds that Iraq would collapse into chaos.'"

"Mr Ross's evidence directly challenges the assertions by the Prime Minster that the war was legally justified because Saddam possessed WMDs which could be "activated" within 45 minutes and posed a threat to British interests. These claims were also made in two dossiers, subsequently discredited, in spite of the advice by Mr Ross.

"His hitherto secret evidence threatens to reopen the row over the legality of the conflict, under which Mr Blair has sought to draw a line as the internecine bloodshed in Iraq has worsened." 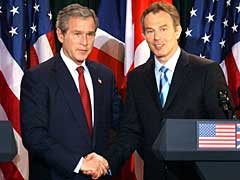 If Tony Blair lied Britain into the Iraq War, it's pretty obvious that George Bush lied Congress and the American people into this also. This isn't an impeachable offence, it's treason - treachery on a grand scale that has set the whole Middle East on fire. It's a betrayal of the British people and the American people and it's a betrayal of the NATO nations who've had to shoulder the fight against the Taliban because of these damned lies.

Treason in the U.S. is impeachable.