Call It What You Will, It's Still Needless Death 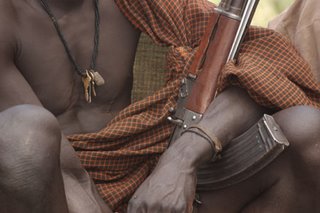 Climate wars, wars of sustenance, before long we'll probably settle on one or two names for what is becoming an increasing tragedy - wars fought by small groups or tribes over inadequate resources without which they may perish.

It's a phenomenon being closely followed by the United Nations as it spreads, initially in Africa. The Christian Science Monitor reports on Uganda's Karimojong herders:

"It's been a bloody first half of the dry season in Uganda's Karamoja region. October to February is the time when grass turns brittle, mud dries and cracks, and competition for scarce resources increases. More than 40 people have died in recent weeks in fighting between Karimojong warriors and the Ugandan Army in the arid northeast of the country.

"The semi-nomadic Karimojong are pastoralists who protect their cows, violently if necessary. The warriors are well armed and this has put them on a collision course with Uganda's government. But the recent clashes are a symptom of more universal problems.

"As elsewhere in Africa, the population in eastern Uganda continues to grow as the environment deteriorates, putting more and more pressure on a land that grows ever drier. At a United Nations conference on climate change held in neighboring Kenya last month, environmentalists warned that Africa would bear the brunt of global warming.

"With more people forced to share fewer resources, experts warn that conflict will increase. 'Climate change will hit pastoral communities very hard,' says Grace Akumu, executive director of environmental pressure group Climate Network Africa. 'The conflict is already getting out of hand and we are going to see an increase in this insecurity.'

"Ms. Akumu argues that, while pastoralists who live in arid regions will suffer, it is the Western countries who are to blame, especially the United States, which refuses to sign on to global protocols to reduce greenhouse gases. 'Pastoralists are the losers - they are not responsible, but they feel the impact of climate change the most. The blame lies squarely at the doorstep of America.'

"A well-established small-arms trade has sprung out of the regional insecurity, with guns flowing in from neighboring Sudan and Somalia. All this means Karamoja is well stocked with weapons and prices are falling: in the 1970s, a gun cost 60-150 cows, by 2004 it had fallen as low as two cows (roughly $100).

"The government estimates that there are up to 40,000 weapons in Karamoja - one for every 24 people - and violent struggles are common. During the first six months of this year, 568 people died violently in Karamoja, many more were injured."

Get used to this. This is just the start of a phenomenon that's going to claim countless lives throughout Africa and other parts of the world for the next several decades. After a while this will get as boring as the daily death tolls in Baghdad. Before you know it, you won't even notice.
Posted by The Mound of Sound at 5:29 PM