Too Weak To Talk 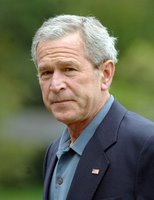 A core recommendation of the Iraq Study Group calls for Washington to open talks with Iran and Syria for help in resolving the insurgency and civil wars in Iraq. President George Bush wasted no time in saying "no way" to that one.

Why should Bush refuse to talk? Talk is free, isn't it? Well, there's the rub.

Talking with Iran and Syria would be, in fact, a process of negotiation. The US would be trying to get these nations to help out with its own problems in Iraq. Now, from the moment he climbed onto the saddle and raised his sabre in the air, George Bush has been condemning these two countries and freely making threats of what lay in store for them if they didn't play ball, Washington style.

How can George Bush go to leaders he's repeatedly villified to ask for their co-operation? He can't. His Mesopotamian misadventure has undermined his credibility, has sapped his political capital. Tehran and Amman aren't extending any overtures to Bush because they see no need to make accomodations, at least not gratuitiously. If there are any deals to be made, Washington will have to go to them - on bended knee, bearing plenty of favours and inducements. Even then they could well turn down the offers, if only to cause Bush and America further embarrassment while enhancing their own stature in the Muslim world.

It doesn't matter that George Bush is the author of his own misfortune, he's simply too weak to talk.
Posted by The Mound of Sound at 10:46 AM