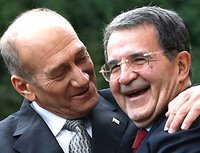 Ehud's so good, you can't see him move his lips.
Just what does Italian leader Romano Prodi think about Hamas? You'll have to ask Israeli Prime Minister Ehud Olmert.

"In the footage, taken by a cameraman for Israel's Channel 10 TV, the two men are seen - apparently unaware they are being filmed - conversing yesterday about what to say at the press conference, held during Olmert's visit to Rome.

"Olmert also asks Prodi to mention Israel's status as a Jewish state, implying that he rules out a key Palestinian demand that millions of Palestinian refugees and their descendants be allowed into Israel, changing its demographic balance and possibly making Jews a minority.

"I have heard you say something about the Jewish state," Olmert prompts Prodi.

"At the press conference, Prodi obliged. 'Every peace process must go through a renouncing of violence, recognition of the state of Israel, recognition of past agreements and, I must add, also the recognition of Israel as a Jewish state,' Prodi said.
Posted by The Mound of Sound at 10:04 AM