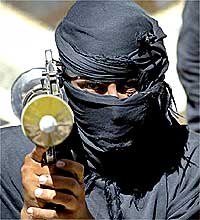 Tensions between Islam's major sects, Sunni and Shia, are increasing as Iran stirs up the Middle East pot. Today these tensions just got worse according to the Associated Press:

"A top Saudi Arabian Sunni cleric on Friday declared Shiites around the world to be infidels who should be considered worse than Jews or Christians, the latest sign of increasing sectarianism in the Middle East.

"Abdul Rahman al-Barak, one of the top several Wahhabi clerics in Saudi Arabia and considered close to the Kingdom's royal family, also urged Sunnis worldwide to oppose reconciliation with Shiites. The Wahhabi stream of Sunni Islam that is followed in Saudi Arabia is conservative and views Shiites as heretics.

"'By and large, rejectionists (Shiites) are the most evil sect of the nation and they have all the ingredients of the infidels,' Abdul Rahman wrote in a fatwa, or religious edict, that was posted on his web site Friday.

"'The general ruling is that they are infidels, apostates and hypocrites,' he wrote. 'They are more dangerous than Jews and Christians,' he wrote in the edict, which Abdul Rahman said was in response to a question from a follower.

"Earlier this month, about 30 prominent Saudi Wahhabi clerics called on Sunni Muslims around the Middle East to support their brethren in Iraq against Shiites and praised the anti-American insurgency.

"Thousands of Iraqis have been killed this year in sectarian bloodshed between the majority Shiites and the Sunni Arab minority, who lost their dominance after the fall of Saddam Hussein."

For the West the issue is can we somehow avoid having to take sides? Is it in our best interests to simply get out of the way and watch from the sidelines?
Posted by The Mound of Sound at 12:17 PM