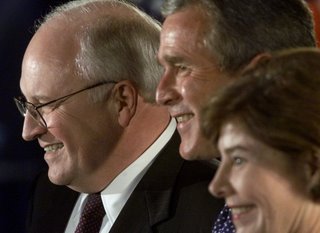 The New Year approaches and it will bring a new day to Washington, one not to the liking of the frat boy president. Time and events have caught up to George W. Bush.

It's interesting to imagine what George Bush will come up with for his New Year's resolution. Of course to play that game you would have to put yourself in his position with all the events past and the looming prospects factored in. You have to dig yourself a hole, chin deep, and jump in and that's just your starting point. My guess is that you would wish the hole wouldn't get any deeper, that you could find a way to stop yourself from the constant digging. For George Bush, that might be pretty tough to pull off.

It's only natural for those who find themselves beset, surrounded, besieged to go on the defensive, hunker down and dig in. That appears to be pretty much what president Bush has decided to do now that he's facing the prospect of a Democratic congress where even a lot of Republicans are sharpening their skinning knives. Come January, George Bush is not going to have a lot of friends in Washington and those who do remain won't wield nearly as much clout to sustain him as they did before.

Looking back, the highlight of George W. Bush's presidency was not even of his own doing but that of a bunch of fundamentalist Islamic nutbars. Osama bin Laden catapulted George Bush to unprecedented popularity and influence. Guided by a vice president who believes the American presidency ought to resemble nothing so much as a monarchy, Bush sailed through five years ruling over a complacent congress almost by fiat. When presented with laws he didn't like, legislation that might restrain him, he simply scribbled "signing statements" on the bottom, exempting himself from their effect. His seizure of power was breathtaking although not many Americans noticed. 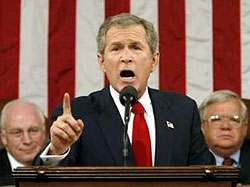 Five years that will be forever etched in American and world history. That marks the span of time in which a president fell victim to his own hubris and malignant advisors and toppled from unparalleled popularity and power into the very abyss of presidential derision. Five years in which he abused the support and sympathy of the world's leaders and peoples and turned his nation into a pariah in their eyes. Five years in which he exploited the weakness and fear of his people, often instilled in them by his own cabal, to strip them of their democratic and constitutional rights, to place himself above international and domestic law, and even to launch an illegal war, a war of aggression and of whim from which he cannot now retreat no matter the worsening failures that he cannot avoid. Five years in which he has destabilized not only the Middle East but also, to a lesser extent, Africa and Asia. Five years in which he has transformed his nation and the world into a darker, vastly more dangerous and volatile place. The man's very legacy is ruin. 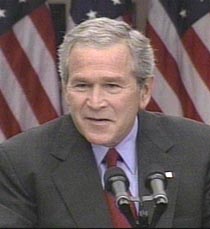 Looking back on this, what must this frat boy see? I suspect he sees very little of what he has done. Accepting responsibility was never in his makeup. If it had been, he wouldn't have acted as rashly as he has so persistently since being given the presidency by a complaint court. He avoids reality by retreating into a bubble where all are excluded save those who say what he wants to hear.

George Bush has retreated to his bunker deep within which he can screw shut his eyes and chant his mantra of "victory in Iraq, victory in Iraq" as though the saying of it will make it happen.

What remains to be seen is how powerfully the Democratic congress will assault the bunker to winkle Bush to the surface. There is much they can do if they have the will which, sadly, is not assured. There are some who may be able to lob grenades into the bunker in the form of spending curbs, taxation impasses and enquiries that strip away the deceit, excesses and abuses that genuinely characterized the last five years of imperial rule. Theirs is a target whose lifeblood, his public support, has already largely drained away, leaving him weakened and vulnerable. What remains to be seen is whether the Democrats will have the courage to do the dirty work necessary to restore integrity to their nation's highest office and that, unfortunately, is a very open question.
Posted by The Mound of Sound at 7:00 AM