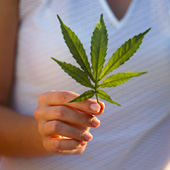 Endless fields of corn, seas of golden wheat, no forget those. America's numero uno cash crop is pot, marijuana, call it what you will.

US production is reported to have increased tenfold in the past twenty-five years and marijuana is now worth more to its producers than corn and wheat combined to other America farmers.

"Despite years of effort by law enforcement, they're not getting rid of it," Mr Gettman told the Los Angeles Times ahead of his report's publication yesterday in The Bulletin of Cannabis Reform. "Not only is the problem worse in terms of magnitude of cultivation, but production has spread all around the country. To say the genie is out of the bottle is a profound understatement."

Figures issued by the State Department and other government agencies show marijuana production increased from an estimated 2.2 million pounds in 1981 to at least 22 million pounds. Some estimates put the current crop as high as 50 million pounds.

President George Bush has a zero tolerance policy on marijuana, including medical marijuana, but his policies have done little to curb production or use.

"The fact that marijuana is America's number-one cash crop after more than three decades of governmental eradication efforts is the clearest illustration that our present marijuana laws are a complete failure," said Rob Kampia, executive director of Washington's Marijuana Policy Project.

Paul Martin was right to move to decriminalize limited possession of pot. It is here to stay and turning moderate users into criminals simply makes no sense.
Posted by The Mound of Sound at 9:14 AM

So what is the solution though? Decriminilization of small possession makes sense but how will it really affect the status of marijuana as a big seller in the US?

But to be frank, of course marijuana is worth more than corn or wheat. Dealing drugs makes a lot of money easy, but its illegal nonetheless. Just because something makes money doesn't mean its good.

The solution lies with convincing people that marijuana shouldn't be purchased in the first place. Canada has anti-smoking ads and has had them for years and they have been successful.

And this isn't just Bush's fault, over the last 30 years there have been at least 5 different presidents.

You're right. A succession of presidents (and prime ministers) have been battling marijuana but what have they accomplished save for giving a lot of really harmless people criminal records?

Alcohol is a drug too and the fact you can find AA meetings in every community attests to its addictive hold on some.

Our governments made a killing on alcohol taxes, especially here in Canada. Why not cut the criminal element out, license pot production and regulate sales, including taxes?