When the Good Guys Are the Bad Guys 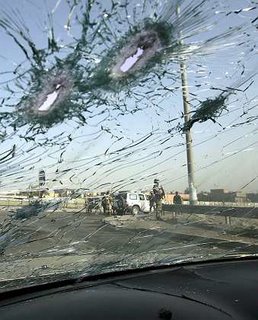 The idea of sending thousands of additional US soldiers to Baghdad to secure the city from Iraq's maurading militias would be a good idea if only American forces weren't working with those same thugs in one guise or another every day.

The government, the army, the police and the 145,000 gunmen with the Facilities Protection Services are heavily infiltrated by the militias and their sectarian leaders. With friends like these...

Consider this eye-opening account of what American forces are up against from today's The New York Times:


"The car parked outside was almost certainly a tool of the Sunni insurgency. It was pocked with bullet holes and bore fake license plates. The trunk had cases of unused sniper bullets and a notice to a Shiite family telling them to abandon their home.

“'Otherwise, your rotten heads will be cut off,' the note read.

"The soldiers who came upon the car in a Sunni neighborhood in Baghdad were part of a joint American and Iraqi patrol, and the Americans were ready to take action. The Iraqi commander, however, taking orders by cellphone from the office of a top Sunni politician, said to back off: the car’s owner was known and protected at a high level.

"For Maj. William Voorhies, the American commander of the military training unit at the scene, the moment encapsulated his increasingly frustrating task — trying to build up Iraqi security forces who themselves are being used as proxies in a spreading sectarian war. This time, it was a Sunni politician — Vice Prime Minister Salam al-Zubaie — but the more powerful Shiites interfered even more often.

“'I have come to the conclusion that this is no longer America’s war in Iraq, but the Iraqi civil war where America is fighting,' Major Voorhies said.

For the American commanders their role is limited. They stay out of the civil war and instead intervene, when and where they can, to prevent atrocities against civilians. Of course, all the King's horses and all the King's men still can't help Iraqis being butchered at a rate of roughly a hundred each day. It is enough to know the numbers would be considerably higher without their presence.

How long can America babysit this civil war? What are the greater, regional risks of allowing the Shia/Sunni bloodbath to play itself out? It is claimed that Iran is already interfering on behalf of the majority Shiite population. How long before the Saudis intervene on behalf of their Sunni brethren and to staunch the current spread of Shia influence throughout the Arab Muslim world?

Can this civil war, if allowed to play itself out, end other than by ethnic cleansing in traditional mixed areas such as Baghdad followed by partition? If the Shiite and Sunni cannot co-exist in a unified Iraq, what hope is there of avoiding a breakaway of the Kurds in the north? If the Kurds take advantage of the chaos in the south to fulfil their historic dream of an independent Kurdistan, will Turkey and perhaps even Iran move against them?

Each question begets more questions of ever more complicated uncertainties and deepening instability. The worsening sectarian butchery in Baghdad and other Iraqi cities is the manifestation of destabilizing power vacuums that go back to the invasion when the Hussein administration was toppled and nothing was available to replace it.

There are so many issues interwoven in this civil war that it defies any clear much less good answer. One thing is obvious: Washington's vision for a future Iraq is not going to be realized by having American forces sitting on the sidelines and protecting the bleachers.
Posted by The Mound of Sound at 8:56 AM