Has Fidel Stepped Down? 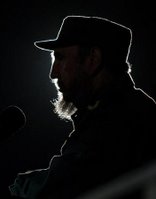 There has been intense speculation in recent weeks that Cuban President Fidel Castro is terminally ill. Cancer is the most common ailment in the rumour mill.

US Congressmen visiting Havana have been assured by Cuban officials that Castro is neither terminally ill nor has cancer but Democratic Representative William Delahunt says he's been told that the Cuban dictator is finished and won't be returning to lead his country.

Delahunt says that control of Cuba has definitely passed to Fidel's brother, Raoul.
Posted by The Mound of Sound at 6:05 AM

How come you punt Tory comments?

Hi: I try not to. I'm really new to this blogging business. I only learned this morning how the comment moderation system works. I'll try to do better.