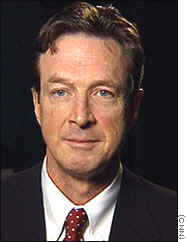 He argues that global warming is pure myth. He's a virtual rockstar to the global warming denial community, especially those who've come to think "Jurassic Park" as something other than fiction.

What are we to make of Michael Crichton? Well for starters, he's a creepy, sleazy old tirebiter as evidenced by the disgusting hatchet job he did on one of his critics. From The Independent:

"Anyone tempted to disparage Michael Crichton, the author of science fiction novels such as Jurassic Park and Airframe, should be aware of the dangers. However constructive the criticism, it's possible the writer will use the pages of his next book to strike back - and he is prepared to strike below the belt.

"Last week Michael Crowley, a senior editor at The New Republic, a weekly political magazine, claimed he had become the victim of a "literary hit-and-run" in the pages of Crichton's newest tome, Next.

"Crowley's crime was to pen an article in March highlighting Crichton's well-known disdain for anti-global warming activists, who he accuses of hyping climate science to back their cause, as well as the influence he allegedly wields in the White House.

"'In his career,' Crowley wrote, 'Crichton has relentlessly propagandised on behalf of one big idea: that experts - scientists, intellectuals, reporters, and bureaucrats - are spectacularly corrupt and spectacularly wrong.'

"'The Bush administration has put this critique into action, trampling the opinions of scientists, exorcising economists, muzzling the press, and stifling State Department wonks.

"'Crichton, in other words, primed America for the Bush era,' he wrote, going on to note that after the release of State of Fear in 2004, Crichton was invited by a presidential aide to meet George Bush and had expounded his anti-intellectual cant to anyone who would listen on Capitol Hill.

"In Next, Crichton has written a 431-page novel about genetic engineering run amok, filling his pages with modified apes chattering in German and parrots capable of holding conversations. But on page 227, the author strays into paragraphs seemingly included purely for retaliation.

"He introduces a new figure who is apparently completely superfluous to the wider plot, curiously called Mick Crowley. His manhood is of unusually small dimensions and it has been places it should not have been. To avoid any confusion, the fictional Crowley is a political writer who went to Yale. Which describes the real Crowley too.

"Elsewhere, he refers to his Crowley as a spoilt heir to a pharmaceutical fortune, a "dickhead", a "weasel" as well as "that political reporter who likes little boys".

"The real Michael Crowley has responded by way of a riposte in the 25 December issue of The New Republic and is already on its website under a link entitled "Michael Crichton, Jurassic Prick".

"He suggests that the author has tried to employ a doctrine called "the small penis rule" whereby it's safe to attack someone by way of a proxy literary figure who is under-endowed on the grounds that no one will ever publicly acknowledge that the guy is them .

"Crowley said he was "strangely flattered". "If someone offers substantive criticism of an author, and the author responds by hitting below the belt, as it were, then he's conceding that the critic has won."
Posted by The Mound of Sound at 8:10 AM

I wrote on Crichton the other day, oddly enough.