It's Official - the Middle East Is Doomed! 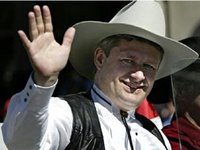 For a guy who's supposed to be fairly bright, Stephen Harper can sure say some pretty stupid things.

"We will not solve the Palestinian-Israeli problem, as difficult as that is, through organizations that advocate violence and advocate wiping Israel off the face of the Earth. ...We are not going to sit down with people whose objectives are ultimately genocidal."

I guess this must be the Leader of an emerging Energy Superpower talking. That much bluster and swagger simply has to come from someplace. Look Stevie, settle down. "We" as in you and me and Canada aren't about to "solve the Palestinian-Israeli problem." You, as prime minister, have no clout at all with Hamas or Hezbollah and certainly even less with Israel.

After having trampled on the "honest broker" mantle that Canada once tried to maintain, Harper sided wholeheartedly with Israel in its invasion of Lebanon and stayed that way despite Israel's excesses and war crimes. Only one side in that little scrap was going to be recognized as having committed war crimes and that sure wasn't Israel as far as Harper was concerned.

Now this jumped up hick pronounces with unbridled grandiosity that he's made it "clear to allies in the region" that Canada is prepared to talk to the various sides of the issue, just not those he doesn't want to talk with. I'm sure they're all waiting with baited breath to hear from Stevie or for another star to appear in the night sky.
Posted by The Mound of Sound at 7:21 AM