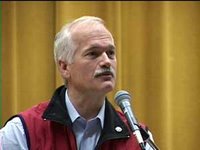 The planets have realligned in the heavens, bad news for Jack Layton.

Layton was instrumental in allowing Harper to get into office, will he become Stevie's bumboy to keep him there?

Layton's gambit in toppling the Martin government hasn't played out too well for the NDP. The Liberal Party under Stephane Dion is flexing its muscles as only the Libs can do - pushing right and left. A lot of progressives aren't happy with Harper and a lot of the left has been turned off by Layton's bumbling.

A quick election threatens Harper and Layton. Both desperately need to regroup and that will take time. It would be damning evidence of rank opportunism but if Jack Layton wants to preserve his own political future, he may have to throw in with Stephen Harper. Wouldn't that be delightful? Martin had to go but Harper stays? Yeah, sure Jack.
Posted by The Mound of Sound at 12:01 PM

As far as the polls show, Dion is pushing left, not right. The Tory support has remained unaffected despite Dion's rhetoric.

As I've noticed before the NDP and the Tories have room to compromise and it wouldn't surprise me if they came to a mutually enriching deal on the environment.

If Dion tries to topple the government without NDP support it will leave him vulnerable to accusations that he is 'siding with the Bloc' (as Harper was earlier). At the same time, I fully expect there to be a poll or two by February that shows the Liberals below the Tories again (statistical probability states this will likely occur). And Dion, interested in regaining power, will wait.

Hahaha....you liberals are a funny lot. Dion has about as much chance defeating Harper as a snowball has in hell.

Good ahead, keep under estimating our Prime Minister.....nothing will change the fact that your liberal party is the same bunch of "entitled to my entitlements" has-beens as they were before your convention. Not to mention that fact that it's going to be pretty tough to go into an election with absolutely no policy...other than doing what ever the polls suggest.