This Melt is Serious 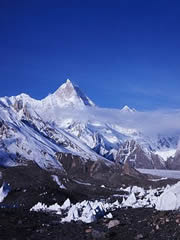 These days we like to use China and India as global warming whipping boys. Why should we clean up our GHG emissions unless they do the same? Their position, that they'll clean up when they see the very nations that have largely created this mess take the first steps - well, that's just so uppity it doesn't deserve our consideration.

Actually China and India are taking global warming very seriously because it poses a looming and serious threat to both. They've teamed up to chart the status of remote Himalayan glaciers. The glaciers feed two river systems that provide water to agriculture regions that feed a sixth of the world's population.

''The melting of the ice sheets and the glaciers is a crisis in the Himalayas,'' said H.P.S. Ahluwalia, who runs the Indian Mountaineering Foundation, which is organizing the expedition with China's Institute of Geology and Geophysics.

''In three to four decades these rivers that feed more than a billion people in our society and adjoining countries will become seasonal rivers,'' Ahluwalia said.
Posted by The Mound of Sound at 9:27 AM